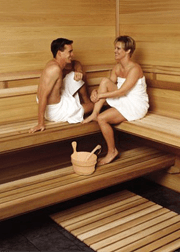 Saunas and sweat baths have been used by various cultures throughout history to flush out toxins and disease and maintain optimal physical and mental health. Saunas, and particularly infrared saunas, can also play a big role in preventing or reversing cancer.

In a 2004 article in the Townsend Letter for Doctors and Patients, Lawrence Wilson, MD, wrote, “If I were to single out one method to combat cancer, it is the sauna. It assists removal of chemical toxins and heavy metals, increases oxygenation, enhances the immune system, and reduces the radiation burden in the body.”

Using heat to treat illness is not new:

Over 2,000 years ago, the famous Greek physician Parmenides said, “Give me the power to create fever, and I will cure any disease.” Modern medicine has also noted that cancer patients who developed a fever sometimes went into remission. Such an observation prompted New York Memorial Hospital physician Dr. William Coley in 1891 to publish a paper on how inducing a fever in the body of a cancer patient might stimulate the immune response and cause cancer remission. Cancer clinics in Germany and Mexico routinely apply this principle by using both infrared hyperthermia and infrared saunas with their patients. Hospitals in more than 20 of the United States are offering some form of hyperthermia treatment for cancer – either locally, regionally or systemically.

While saunas are not nearly as potent as hyperthermia treatments (which can expose the body to up to 113 degrees Fahrenheit), infrared saunas can heat the body a few degrees and cause a fever. This is a much gentler and slower method, but it is much safer and easier to tolerate and control.

Infrared saunas provide a form of whole-body hyperthermia that boosts health in many ways. Dr. Wilson noted that infrared sauna therapy for cancer offers a combination of healing mechanisms that act simultaneously and synergistically to support the fight against cancer.  I have my own list, which I will be presenting in a series of blog posts, starting with:

The principle of hyperthermia is that cancer cells are much more sensitive to and intolerant of the effects of excessive heat than normal cells. Tumors have an impaired ability to adapt their blood circulation to the effects of high temperatures.  Said simply, because cancer cells are weaker than normal cells, they are more susceptible to damage from heat. In fact, high temperatures can actually kill cancer cells, usually without damage to healthy cells.

According to the National Cancer Institute, “Hyperthermia (also called thermal therapy or thermotherapy) is a type of cancer treatment in which body tissue is exposed to high temperatures. Research has shown that high temperatures can damage and kill cancer cells, usually with minimal injury to normal tissues. Many studies have shown a significant reduction in tumor size when hyperthermia is combined with other treatments.”

In a clinical study published in 2009 in the Journal of Cancer Science and Therapy, scientists studied far infrared’s effects on human cancer cells in vitro and on cancer cells in mice. Far infrared therapy reduced tumor volumes 86% in just 30 days.

In another study, researchers in Japan discovered that whole-body hyperthermia with far infrared strongly inhibited the growth of breast cancer tumors in mice without deleterious side effects. Researchers believe this therapy is a promising noninvasive treatment for breast cancer.

In future articles, I will cover five other ways that saunas can help fight cancer.