3-D Mammograms: Do They Save Lives?

3-D Mammograms: Do They Save Lives? 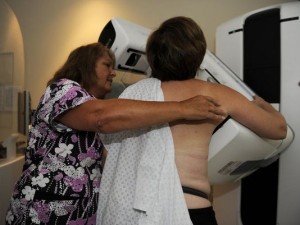 However, there is no proof that finding these extra cancers will actually save lives — or simply lead more women to treatment. In fact, the 3-D mammograms deliver DOUBLE the radiation of standard mammograms, and RADIATION IS A RISK FACTOR FOR BREAST CANCER! Not only will this technology pick up more breast cancers – it may actually CAUSE them!

According to Joseph Mercola, MD, mammograms use ionizing radiation at a relatively high dose, which can contribute to the mutations that can lead to breast cancer. In fact, you can get as much radiation from one mammogram as you would from 1,000 chest X-rays. Dr. Samuel Epstein, one of the world’s top cancer experts, has stated:

“The premenopausal breast is highly sensitive to radiation, each one rad exposure increasing breast cancer risk by about one percent, with a cumulative 10 percent increased risk for each breast over a decade’s screening.”

Scientists at Cornell University agree that ionizing radiation is a definite risk factor for breast cancer:

“Studies of groups of people exposed to ionizing radiation have conclusively found that sufficiently large radiation doses can cause breast cancer. These groups include: 1) the female survivors of the atomic bombings in Japan during World War II; 2) women given radiation therapy to treat Hodgkin’s disease and both malignant and benign breast disease; 3) girls treated as infants or children for several non-malignant conditions such as enlarged thymus glands; and 4) young adolescents and women who received large numbers of diagnostic x-rays … In fact, more is probably known about the patterns of breast cancer following radiation exposure than of any other cancer, including leukemia.” Research has revealed a number of conclusions about radiation-induced

First approved in 2011, 3-D mammography (also known as tomosynthesis) provides three-dimensional images of the breast by using a technology similar to CT scans, or computed tomography. The imaging machine moves around the breast in an arc, taking multiple X-rays that a computer forms into a 3-D image. Because the machine cuts the images into digital slices, doctors can look at the breast as if turning pages in a book, according to Dr. Emily Conant, chief of breast imaging at the University of Pennsylvania’s Perelman School of Medicine.

This week’s JAMA article revealed that tomosynthesis can improve breast cancer detection, reduce false-positive results, and lower recall rates. The study, the largest of its kind, analyzed 454,850 mammographic exams from 13 breast screening centers, comparing results of women screened in 2010 and 2011 using standard digital mammograms with women screened from 2011 to 2012 with a combination of digital mammograms and tomosynthesis.

Conventional mammography, the most widely-used screening modality for breast cancer, often yields suspicious findings that turn out not to be cancer (false positives). These inconclusive findings mean a higher recall rate, the rate at which women are called back for additional imaging or biopsy. These second screenings can be costly, stressful, time-consuming, invasive, and ultimately unnecessary. Compared with conventional mammography, the average recall rate using tomosynthesis decreased from 10.4 percent to 8.8 percent.

The Downside of 3-D Technology

However, there are multiple drawbacks to this technology. First, as I mentioned, is the increased radiation exposure. Dr. Conant acknowledged that women are exposed to twice as much radiation from 3-D mammograms, compared with standard mammograms.

Second, the difference between the two types of exams, in terms of the absolute number of cancers found, is very small, noted Fran Visco, president of the National Breast Cancer Coalition. For invasive breast cancers — those that have grown beyond the milk ducts — standard mammograms detected 2.9 cancers per 1,000 women, whereas the combination approach found 4.1 tumors per 1,000 women. (There was no improvement in detection of non-invasive cancers called ductal carcinoma in situ (DCIS), most of which do not develop into true cancers.)

More diagnoses may lead to more treatments, which may lead to complications. Many cancer researchers estimate that 1% to 10% of breast cancers are “overdiagnosed” or treated even though they would never have become life-threatening.

Moreover, long-term benefits of this technology are uncertain. The study didn’t follow women over time, so doctors don’t know whether tomosynthesis actually saves lives. “A screening that finds more breast cancers only helps women if the test also reduces their risk of dying,” stated Visco. We couldn’t agree more!

Thermography is an excellent breast screening test that delivers no radiation, is non-invasive, inexpensive, safe and accurate and picks up cancers 8-10 years before mammograms can with over 95% accuracy! Check out this informative video on thermographic imaging featuring Dr. Philip Getson. Also watch for an upcoming related podcast in which Dr. Christine Horner questions whether mammography really saves lives and shares proven natural approaches that can!