A Curse and a Blessing

A Curse and a Blessing 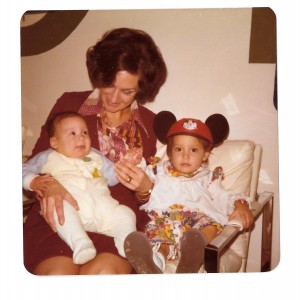 February 12 is an infamous date in my life. Thirty-eight years ago today, on Feb. 12, 1977, my young husband Harvey Silberstein died of cancer and the ravages of his treatments. As many of you know, he left me with two babies, a broken heart, and a burning desire to make a difference.

To that end, in October of 1977, I founded the non-profit organization we have come to know as BeatCancer.org, in the hopes of helping other families avoid the terrible tragedy that mine had to endure. Since then my colleagues and I at the Center for Advancement in Cancer Education have been privileged to touch over 100,000 lives.

The Universe works in mysterious ways. As a young bride sequestered in the ivory tower, I didn’t know how to boil water…. Who would have thought that I would end up authoring two recipe books? As a graduate student living on ice cream, sodas and hot dogs, who would have believed I’d be counseling people on healthful eating? As someone who had paralyzing stage fright every time she had to speak up in class, who could have imagined I’d be delivering lectures all over the country?

What is second nature now was something I had to search out for myself back in the 1970s. And research I did! Although my husband never got out of the hospital in time to try anything I discovered, he did gift me the opportunity to learn what I needed in order to ensure my health and that of my children (not to mention the others I have been blessed to help).

Realizing that my daughter and son, aged 14 months and three months at the time of their father’s death, were unknowingly conceived while he already had cancer, I made a firm commitment to build up their little immune systems in every way I could. So as a young mother, I began to prepare my own natural baby food from scratch. When my children were ready for school, I packed them healthful lunches every day for 12 years until they graduated high school. I’m sure they did their fair share of trading the carrots and celery I sent in exchange for pizza and pbj on white bread, and I got the usual “Mom, you’re weird” and “there’s nothing to eat in our house,” but I kept trying. I sent them off to college with a prayer. 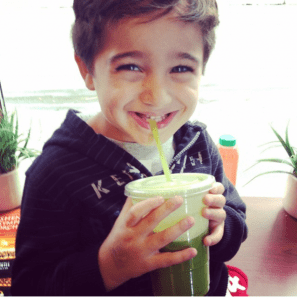 Well, it’s all come full circle now. My babies have babies of their own. My daughter sneaks kale into the smoothies she makes for her kids, and my son’s children love making smoothies themselves. Here’s our four-year-old mini chef, who loves preparing his morning smoothies at home and enjoys them while on the go. In the green concoction pictured, he and his mom used spinach, pineapple, almond milk, flax seeds, maca and coconut meal.

How wonderful! I could not be blessed more!