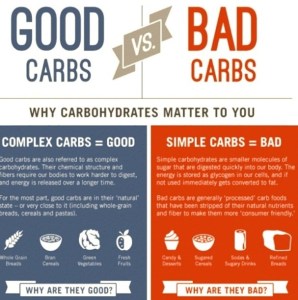 As many of my readers have noticed, I have written two previous articles about sugar and cancer. My second blog included several recent research studies linking the two.  Well, here’s another: New York University researchers just reported in the April 5 issue of Science Daily their latest study results showing that highly processed carbohydrates are linked to increased cancer rates.

Most of us know a fair amount about the difference between healthy and unhealthy carbohydrates, especially in the context of weight control. The new research adds one more reason to avoid sugary beverages, processed foods and other refined carbohydrates — eliminating them may help reduce your risk of cancer.

The study was based on the health records of 3,100 volunteers followed since the early 1970s. Starting in 1991, the researchers began tracking participants’ diets through detailed food frequency questionnaires. All foods were categorized according to their carbohydrate quantity and quality. Then, controlling for many variables, the researchers compared these results to the participants’ cancer rates. And while the study wasn’t flawless (99% of the volunteers were Caucasian, so further study is needed to determine if these associations hold true in more ethnically-diverse groups), the research findings are still significant.

What the Research Showed

The NYU study found that consuming poor-quality carbohydrates like refined flour, white sugar, corn syrup and soft drinks significantly increased prostate cancer risk. On the other hand, choosing healthy carbs like legumes, fresh fruits and whole grains was associated with a substantial reduction in risk. In fact, legumes such as beans, lentils and peas were associated with a 32% lower risk of all overweight- and obesity-related cancers, including breast, prostate and colorectal cancers.

Among study participants, high intake of processed lunch foods such as pizza, burgers and meat sandwiches doubled prostate cancer risk, while regular consumption of sugary beverages was associated with triple the risk of prostate cancer.  By contrast, healthy carbohydrate-containing foods like legumes, non-starchy vegetables, fresh fruits and whole grains were associated with a 67% lower risk for breast cancer.

Carbophobia is often misplaced, as there are vast differences among carbohydrates. In the NYU study, breast cancer risk was reduced among participants who actually consumed high levels of carbohydrates, but those with the highest level of carbohydrate intake also had high intake of fruits and vegetables, whole grains and legumes. These findings underscore the idea that the type of carbohydrates matters more than the total amount of carbohydrates.

According to Nour Makarem, a doctoral student at NYU and the study’s lead author, “One of the most important findings here is that the type of carbohydrate-containing foods you consume can impact your cancer risk. It appears that healthy carbohydrate sources, such as legumes, tend to protect us from cancer, but non-healthy ones, such as fast foods and sugary beverages, seem to increase the risk of these cancers.”

The Difference Between Glycemic Index and Glycemic Load

Both the quantity and quality of carbohydrates determine the body’s glycemic response to a food, so it was valuable that the NYU researchers categorized all of the study participants’ food sources by looking at both the glycemic index and the glycemic load. Since those concepts can be confusing, let me try to explain them.

Glycemic index (GI) ranks how quickly the carbohydrates in a food are digested, that is, how rapidly they break down, convert to sugar and enter the bloodstream.  The glycemic index is expressed on a scale of 0 to 100, with a GI of 55 or less considered low; a GI of 56-70 considered medium; and a GI over 70 considered high.

For example, although the GI of watermelon is 72 (high), its GL is only 7 (low).  Because there are not a lot of carbohydrates in watermelon, since it is mostly water, it does not impact blood sugar much.  Carrots, too, have a high GI of 71 but a low GL of 6.  That means that the average serving of carrots has very little impact on blood glucose levels.  On the other hand, juicing carrots (which we recommend in combination with greens) allows for consumption of more carrots all at once and therefore has a greater impact on blood glucose.

After taking into account multiple cancer risk factors, the study found that eating foods with a higher glycemic load was associated with an 88 percent higher prostate cancer risk, with the increase most pronounced for people who regularly consumed sugary beverages, including sugar-sweetened soft drinks, fruit juices and fruit drinks.

“Americans consume almost half of their added sugars in beverages,” said Makarem. “Sugar-sweetened beverages have been shown to increase the risk of obesity and diabetes, and our study documents that they may also have a detrimental impact on cancer risk.”

Although the study results point only to associations and do not necessarily prove cause-and-effect, its findings are in line with previous studies which have shown that malignant cancer cells feed on sugar. Furthermore, diets high in refined carbohydrates negatively impact body fat and contribute to dysregulation of insulin and glucose — additional factors that increase cancer risk.