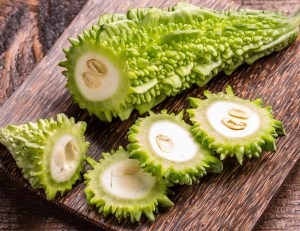 Bitter melon (Momordica charantia)
is a vegetable that is common in kitchens all over Asia and is also used for medicinal purposes in China, India, Central America and elsewhere around the world. It has been gaining popularity in the West as well, largely because of its benefits for diabetes. In recent years, studies have shown that bitter melon leaf and fruit extract can also be very effective for cancer healing and prevention, especially for breast cancer.

Fellow study researcher Rajesh Agarwal, Ph.D., of the Department of Pharmaceutical Sciences at the University of Colorado in Denver added: “This study may provide us with one more agent as an extract that could be used against breast cancer if additional studies hold true.”

The 2010 report made headlines when it was published six years ago, yet many questions remained unanswered as to the exact processes through which bitter melon seemed to work on breast cancer cells. Then, in 2013, scientists at China Medical University in Taiwan conducted research based on earlier Chinese findings in which new kinds of glycoside substances were found in Momordica charantia.

Based in part on that earlier research, researchers at the China Medical University discovered that the glycoside DMC found in bitter melon (which has an effect on insulin stabilization and glucose metabolism) also had an effect on breast cancer tumors. According to the researchers, its ability to modulate these reactions on several fronts was also the catalyst for breast cancer cell death.

Glycosides are a class of molecules found in plants in which a sugar molecule is bonded to a “non-sugar” molecule. Many plants store medicinally important and biochemically active chemicals in the form of inactive glycosides. Bitter melon contains glycosides such as vitamin C, mormordin, carotenoids, flavonoids and polyphenols, all known cancer-fighters and immune system regulators. But how exactly do glycosides work to fight cancer?

Glycosides use certain enzymes to set them in motion so they can do their job. In addition to bitter melon, these plant-fortifying substances can be found in monk fruit, yams, blueberries, cherries, pineapple, flax seeds, apricot seed and hundreds of other plants in nature. Certain types of glycosides, such as those found in monk fruit, stevia, and sweet cherries, are responsible for giving these substances their sweet taste. Besides helping to regulate insulin levels, most importantly, glycosides are antioxidants that help to reduce inflammation in the body (thus fruits such as cherries can help with conditions like arthritis and gout) and protect against cancer.

By now it should be obvious that bitter melon glycosides are pretty amazing substances when it comes to health and well-being, not only for cancer healing and prevention but also for diabetes, insulin resistance, metabolic regulation and in lessening the inflammatory response. And without a doubt, when it comes to breast cancer prevention and healing, bitter melon is more than just a common kitchen vegetable.