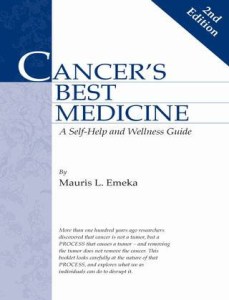 As many of you know, BeatCancer.org offers various educational materials, the majority of which are available from our e-store. Most of them I have developed myself. There is one notable exception, however: Cancer’s Best Medicine by Mauris Emeka. The book is short and simple, but its message is so important – and stated so clearly — that I couldn’t have said it better myself. Here is another reader’s opinion.

Cancer’s Best Medicine (2nd edition, copyright 2008, 64 pages) by Mauris L. Emeka is quite honestly the all-around best book about preventing and/or curing cancer that I have read so far. Mr. Emeka was motivated to undertake extensive research about cancer, following the loss of his wife to pancreatic cancer. The information he gleaned from studying the published cancer research has been distilled to its critical essence within the pages of this highly readable and highly focuse book.

Emeka cites studies that document everything he states, and at no point does it seem he had inserted opinion or assumption. In particular, he emphasizes the documented fact that cancer is a bodily process tied to the modern western diet. Cancer is NOT the tumor or malignancy. Those are mere symptoms of the disease, and treating symptoms does not address the underlying cause, particularly when treatment often involves dangerous and unhealthful chemotherapy, surgery, or radiation treatment.

In Cancer’s Best Medicine, we learn WHY cancer occurs, and HOW we can prevent and/or cure it by diet alone. Unlike some other books I’ve read on this topic, Emeka doesn’t just say “eat your veggies” and be done with it. He delves into the chemistry and bacteriology of the human body. He also delves into the unbalanced chemistry of the Western human body, which is quite a bit different from what it should be, due to decades of consuming foods which have a detrimental effect on our bodies.

Emeka also explains WHAT triggers the gradual cancer process, which ultimately leads to a malignancy somewhere in or on our bodies, if not halted first by application of the principles herein. Then he lists various foods to avoid, and those to consume in greater quantities. He provides good, solid, and doable help to get folks started on the path to a cancer-free future.

In what I thought was a rather interesting style of writing, he does not tell YOU what to eat but rather states what HE would do if HE were told he has a symptom of cancer. This is probably a very good idea, because he is not a medical doctor, and should steer clear of being perceived as practicing medicine without a license. Mauris Emeka is just a man who wanted to know why he lost his wife to a disease process which could have been prevented if the information HE unearthed was readily available to, and practiced by, the medical profession. He only wants to help YOU learn what HE learned. This is truly a book which should belong in everybody’s home, and I recommend it most sincerely.