Breast Cancer and Fitness: When Cancer Happens to a Fit Body

Breast Cancer and Fitness: When Cancer Happens to a Fit Body 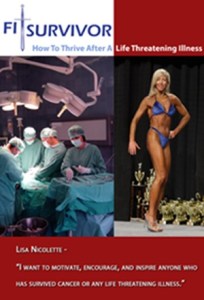 During the summer of 2007, I had trained with a team of competitive bodybuilders and fitness models with the goal of not only achieving the fit look of a bodybuilder but also getting ready for my first fitness competition! After many years of challenges due to professional commitments and a high-risk career, I was finally going to fulfill my goals and dreams!

But in early 2008 I was diagnosed with breast cancer after finding a lump one night in the shower. I will never forget the day my surgeon called to inform me that I had breast cancer! How could this have happened? I was in top shape and ready to compete! Unfortunately, I had to cancel the event and face the operating room instead.

Prior to surgery, I continued to train at the gym even though I had a recent cancer diagnosis. My goal was to be the fittest cancer patient walking into the OR! I felt that staying in top shape would enable me to heal faster, and the exercise kept me sane during this very difficult period in my life.

I went through a lumpectomy, along with the removal of five lymph nodes, and seven weeks of follow-up radiation treatments. I trained all through radiation so I could maintain my strength. I also started on Tamoxifen, a hormone blocker, which would have had me climbing the walls due to hormonal changes if I wasn’t working out!

My doctors felt that fitness helped me heal faster than the average cancer patient. Many of my healthcare professionals commented on my biometrics being off-the-charts healthy compared with other patients across the board!

After I took Tamoxifen for five years, my doctors advised me to get a total hysterectomy and to stay on the drug for another five years.  I refused! By mid-summer of 2013, when I found another lump near my scar and followed up with a mammogram and sonogram, I was advised to get another biopsy, but I ran! I was so exhausted and drained from previous treatment that I was not about to go through anymore!

I contacted an alternative doctor, had a thermographic screening — and they found nothing! No cancer cells, and I’m OK! I refused uterine biopsies and more surgeries because I didn’t want to face more suffering for nothing! I’m only getting my energy back now seven years later and often feel that I made a mistake by going the conventional route to cancer treatment in the first place.

I encountered much opposition for refusing to return to orthodox medicine, but I stuck by my decision. I often wish I could take back seven years. I have turned to alternative medicine and diet now, and I’ll never look back! It took the draining effects of prior treatment to motivate me to go “alternative” all the way from now on.

I had begun working at my local YMCA as a personal trainer with the goal of trying to jump start a fitness regime for cancer patients and cancer survivors and helping these patients rebuild what was lost during treatment, such as muscle mass and bone density. Recently, when the program was cut due to budget challenges, I relocated to Columbus, Ohio, a huge fitness mecca.  I hope to build my idea of helping cancer survivors here.

I believe that fitness and exercise can help prevent a recurrence of cancer by reducing body fat and building strength. Exercise can also give cancer patients a more positive outlook on their future and empower them by giving them back the confidence that is often lost during a life- threatening illness.

It took a cancer diagnosis to finally propel me in the direction to ultimately fulfill many professional and personal ambitions that were sitting on my bucket list! My goal is to motivate others to do the same and never settle for a life of mediocrity! Never let others dictate what you can’t do! I have created a motivational logo and have a published a motivational eBook that demonstrate how I stayed motivated during treatment, and I am excited to share them on my website, www.fitsurvivor.com.