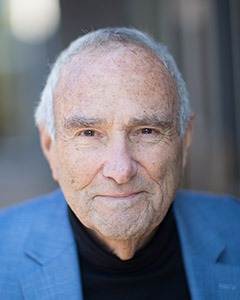 It seems I am often running a few weeks behind the news, and this story is no exception. I wish I could write blog posts that are perfectly timely, but I was out on the road when this story broke, and I wanted to write a sincere article that took time and thought. Burton Goldberg, a colorful and outspoken colleague of mine for decades, died Nov. 13 at the age of 90. A multimillionaire and one of the founding fathers of Miami’s night life, Burton was known to me and many others as “the voice of alternative medicine.” In 1997, he gifted me an autographed copy of his Definitive Guide to Cancer with the personalized inscription, “For Susan – Keep flying with the angels—God bless.” Burton, I wish you the same.

Goldberg revealed in a 1994 Miami Herald interview that his transformation into an integrative medicine researcher was inspired by the nutrition-mediated recovery of a girlfriend’s teenage daughter who attempted suicide. After that, he spent over 30 years traveling the world in search of the top therapies in the fields of natural healthcare and holistic, alternative and integrative medicine — especially for cancer, heart disease, diabetes, depression, addiction, allergies, arthritis, and autism.

Margaux Vega said of her grandfather, “While he was incredibly successful with The Mutiny Hotel, he was most proud of his work in alternative medicine and the thousands of people he was able to help. He fought for alternative medicine before it was mainstream and … helped pave the way for others to follow.”

Driven by his mission to empower people with the information they need to make positive health choices, he kept a heavy schedule of traveling, speaking, and teaching all over the United States and Canada. Passionate about alternative medicine, he committed the rest of his life to helping forge profound, positive changes in health care and medical awareness. Whereas mainstream medicine can work wonders in trauma and emergency situations, Burton, like me, believed that in the vast majority of health conditions, alternative medicine, with treatments based on clinical studies and verifiable results, has much better potential for reversing disease.

Often on his soapbox discussing the politics of medicine, he’d decry how the insurance and pharmaceutical industries are controlling medical care, and campaign for new healthcare legislation favoring alternative medicine as the best hope for real change in our country’s healthcare system. His goal was to move our society from a system of sick care to a system of well care.

Echoing our own philosophy at BeatCancer.org, Goldberg wrote on his website:

“Integrative oncologists seek to live by the axiom ‘Above all else, do no harm.’ Their approach is to use holistic therapies that minimize side effects, that make treatments more tolerable, and that rebuild the patient’s physiology to provide the best odds of long term cancer survival with a good quality of life.

“There is no single magic bullet method to cure cancer. Many factors contribute to the development of cancer and many modalities and substances must be used to reverse it. Alternative medicine addresses the whole person: Nutrition, diet, the immune system, and lifestyle must all be examined.

“We are not claiming, as certain shortsighted holistic practitioners do, that diet and nutrition by itself can cure cancer. This is overly simplistic and wishful thinking. However, the wrong diet is the equivalent of pouring gas on the fire. In addition, the right diet is also highly beneficial to the overall healing process and must be viewed as a meaningful piece of a bigger healing puzzle.

“A century ago, one in 33 people had cancer; today, it is nearly one in two and still growing. When I was a child, cancer was relatively rare— now it is the number one cause of death in the United States for all people 85 and younger. No other health topic today has the urgency of cancer because no other health condition is escalating as fast, and no other disease has such an abysmal success rate when treated by conventional medicine.

“The truth is that we are no better off than when President Nixon officially declared war on cancer in 1971. In actuality, we are far worse off than ever before. At the time of Nixon’s declaration, one out of every ten Americans developed cancer. Today, despite the trillions of dollars that have been spent on research looking for a cancer cure in this country, that figure has risen dramatically….

“In addition, though oncologists now have an array of more powerful chemotherapeutic drugs, radiation, and gene therapies at their disposal, overall cancer remission rates are little changed from the 1950s. To make matters worse, cancer is now striking earlier than ever before. It is not uncommon for men and women who are only in their 30s to be diagnosed with prostate cancer or breast cancer, a fact that was virtually unthinkable a decade ago.

“I know this first-hand, not only because of my many decades of research, but also because I, myself, am a TWO-TIME cancer survivor. In both cases I was successfully treated and spared the debilitating side effects of conventional cancer treatments that so many cancer patients needlessly suffer—and often die—from. Thanks to all I’ve learned about cancer, I was spared such treatments because I knew the best alternatives to them right from the start, including safer and more accurate diagnostic methods that your doctor very likely does not know about. Just as I was cured of my cancer, and spared of such side-effects, I want the same to be true for everyone else who is struck by this terrible disease. This is my passion, and this is my creed: Cancer is NOT a death sentence!

“Although many of the alternative and integrative methods for treating cancer have been with us for more than 50 years, it is only recently that these approaches have achieved major clinical breakthroughs and moved into wider public awareness. I wish I had known more about them myself when my sister and my mother were dying of cancer. Seeing them ravaged not only by cancer but by the toxic treatments of conventional medicine made me think there must be a way to treat cancer without poisoning the body and destroying the immune system, and I vowed to find it.”

Sounds just like me after my young husband died of cancer and the ravages of his treatment decades ago. Well, here we are decades later. Research in complementary and alternative approaches to cancer is still grossly underfunded, toxic chemotherapy and radiation treatments are still the big weapons in conventional oncology, and most patients are either unaware of their options or too afraid to pursue them. Unfortunately, Burton, our work is not yet done!