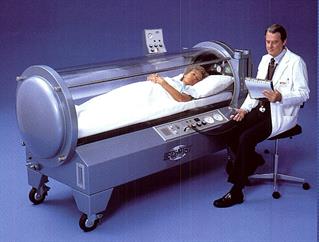 Imagine a large room. Several individuals are lying on long, cylinder-type beds with glass tops. They have their eyes closed and appear to be very relaxed. This is not a scene from a science fiction movie. In fact, these days, this scene could be at a local hospital, as more and more conventional medical institutions embrace a therapy known as HBOT, or Hyperbaric Oxygen Therapy. In private clinics, HBOT has been used for over fifty years to repair burns, heal chronic wounds, and promote recovery from serious illness. Increased systemic oxygen has proven to stimulate the immune system and the overall healing process.

But can HBOT have an effect on cancer too?

The Undersea and Hyperbaric Medicine Association has estimated that 3,000 institutions, including hospitals and private clinics, offer HBOT treatment. In most places, patients in single units or group chambers breathe pure oxygen in an environment where the atmospheric pressure is sometimes three times the normal amount.

According to experts, time spent in a hyperbaric oxygen chamber can significantly elevate oxygen levels in the blood stream. Even though oxygen is necessary for cellular survival, the majority of air in the normal atmosphere is made up of only about 21% oxygen. Breathing in 100% oxygen in a high pressure environment can stimulate healing on all levels by promoting the production of therapeutic chemicals in the body.

Although it views HBOT as beneficial for some specific conditions, conventional medicine does not recognize the cancer healing possibilities of HBOT. In fact, much conventional research has been done to determine whether the treatment actually promotes cancer. In study after study, however, it has been proven that it does not.

One way that HBO therapy can affect cancer cells is through a reduction in hypoxia, a low-oxygen condition that is common in cancerous tumors.

“Hypoxia is a critical hallmark of solid tumors and involves enhanced cell survival, angiogenesis, glycolytic metabolism, and metastasis,” states a report on HBO published by the National Center for Biotechnology Information (NCBI). “Hyperbaric oxygen (HBO) treatment has for centuries been used to improve or cure disorders involving hypoxia and ischemia, by enhancing the amount of dissolved oxygen in the plasma and thereby increasing O2 delivery to the tissue.”

HBO therapy can also significantly reduce inflammation in the body in general. C- reactive protein (CRP), which measures the overall inflammatory response in the body, is a common marker for cancer.

High levels of oxygen can also promote the growth of new blood vessels. This increase in blood vessel growth, however, does not affect the growth of cancer cells because cancer cell growth happens through anaerobic activity, not through cellular respiration. Nobel Prize-winning cell biologist Otto Warburg discovered this uniqueness in cancer cells in the 1930’s.

Feldemeier, Carl and associates in their article entitled “Hyperbaric Oxygen: Does It Promote Growth or Recurrence of Malignancy?” concluded that“the published literature on tumor angiogenesis mechanisms and other possible mechanisms of cancer causation or accelerated growth provides little basis for HBO2 to enhance malignant growth or metastases. A history of malignancy should not be considered a contraindication for HBO2 therapy.” (Undersea Hyperb Med2003 Spring;30(1):1-18.)

According to Dr. Farris Gulli of the Hyperbaric Medicine Center at Michigan’s Beaumont Health System, between 5 and 15 percent of cancer patients undergoing radiation therapy will experience chronic complications. Many of these complications come from damage to blood vessels which feed healthy cells. Breast cancer patients who undergo radiation, for example, can develop severe chest wounds that may never heal.

A 2013 Japanese study discovered that HBO therapy in combination with radiation therapy and chemotherapy greatly enhanced the effectiveness of the conventional treatment. Earlier studies in 2009 and 2007 found that those conventional cancer patients who utilized HBO as well have longer survival times and deal with fewer side effects.

This makes sense. Oxygen is a natural antibiotic. According to experts on Multiple Sclerosis (many MS patients benefit greatly from HBO therapy):

“…We all breathe oxygen all the time but when we are ill we can use the chamber to increase the dosage of oxygen, delivering more to damaged areas in the body and stimulating the healing process. Oxygen is our body’s antibiotic; it controls over 8,000 genes and a course of 20 sessions increases our own stem cells eightfold.”

HBO Therapy and the Ketogenic Diet?

Although HBOT can be a great adjunct to other conventional or naturally-based modalities, there have been no studies where HBO alone has led to cancer apoptosis or tumor reduction. Studies have confirmed, however, that when HBO is combined with a ketogenic diet, the combination produces “significant anti-cancer benefits.” This is due in large part to cancer’s dependency on glucose for survival. The ketogenic diet is extremely low-carb and thus low-glucose as well as moderate protein and high healthy fat.

A mouse-model study conducted in 2013 and published in the journal Plos One found that combining HBO therapy and a ketogenic diet led to a 78% increase in survival time compared with that of a control group. HBO therapy can provide the final punch to cancer by blasting the body with high oxygen levels, to which weakened cancer cells have no choice but to succumb.

Whether you decide to use Hyperbaric Oxygen Therapy in conjunction with other modalities in order to overcome serious disease like cancer or you are already healthy and want to use it in order to stay that way, HBO therapy should definitely be considered as part of your healthy life and healthy breast protocol. For all living things, oxygen equals life. For your body, increased oxygen means increased energy and well-being at the cellular level.