Cancer Can Be Killed Naturally

Cancer Can Be Killed Naturally 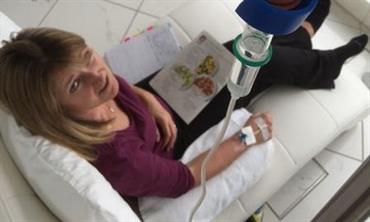 One of the trending stories this week was actually written in October 2015 by Jeff Witzeman about his wife’s successful natural treatment for aggressive squamous cell bladder cancer. Although Kerry’s doctor told her she needed to have her bladder removed and would have to wear a urine drainage bag for the rest of her life, she decided to follow her sister’s and nephew’s path to Germany, where their advanced cancers were successfully treated “naturopathically,” without surgery or chemotherapy.

When it comes to natural treatment alternatives, German clinics are much more sophisticated than those in the United States. For example, doctors at the Infusio Clinic in Frankfort, Germany, treat cancer with non-toxic methods like heat and oxygen to kill cancer, and then use nutritional supplementation to strengthen the immune system. As stated on their website, “The Infusio concept utilizes medical, biological and bio-energetic modalities designed to rebuild the immune system and target the root cause of disease.” Now that’s my kind of clinic!

At BeatCancer.org, we have long maintained that cancer cannot survive in certain environments – it’s one of the key topics I cover in my Fight Cancer with Your Fork lecture. Kerry and her family learned that lesson too: If you starve cancer of what it feeds on, killing it becomes relatively easy.

First, since cancer thrives on sugar, Kerry was prescribed an aggressive diet heavy in fruits and vegetables with no refined sugar. Second, since cancer cannot survive in temperatures exceeding 105 degrees F, doctors at the Infusio Clinic treated her with a hyperthermia machine that killed the cancer cells while preserving adjacent normal cells. Third, since cancer prefers a low-oxygen environment, blood was drawn out of her body, filled with oxygen and then re-inserted, thereby creating an oxygen-rich environment that antagonizes cancer.

The total cost was about $28,000, which the Witzemans called “a bargain considering what we would spend in co-pays for years of chemotherapy, drugs, and surgery, not to mention the treatment of infections.” The clinic was more like a spa, with nice music, healthy green juice, and a relaxed environment. More importantly, when Kerry returned home to the United States, her oncologist could not find a single trace of her cancer!!!

But what about patients who just cannot afford to go to a clinic in Germany? From my own observations, cancer recovery is not necessarily about how much money you have, which treatments you get, or who your doctor is. While these are important, I believe that getting well is much more about who you are and who you are willing to become.

You can create an internal environment that is inhospitable to cancer right at home. Green juices, oxygenation through breath work and movement, detoxification, saunas, music and relaxation, a diet rich in fresh fruits, vegetables and whole grains, and being authentically who you really are — all help to create a anti-cancer environment.

Jeff and Kerry questioned standard oncologic therapy “that systematically cut, maimed, and killed its people with treatment methods that did not work.” They asked, “Why on earth would chemotherapy drugs be the go-to option when chemotherapy destroys everything around it, not just the cancer? Why destroy the immune system with chemotherapy thus leaving the body WEAKER and less able to fight off the second wave of cancer cells?”

The answer, they discovered, was that in the United States “the FDA bans everything… that conflicts with chemotherapy and chemo drugs because that’s where the money is… well over $125 billion a year.” We will all benefit if new cancer initiatives spearheaded by Joe Biden and Sean Parker start funding cancer immunotherapy.

In the meantime, we at BeatCancer.org want cancer patients to know that they have options. If they choose chemotherapy, we are there to help them optimize their response and minimize side effects. If not, we can provide personalized coaching and individualized resources and referrals for non-toxic treatments. Indeed, cancer can be killed naturally!