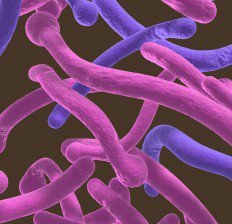 You may have read my previous blogs about cancer and sugar. Here’s one more: Some scientists think there is a connection between cancer and a yeast or fungal overgrowth known as Candida albicans — and sugar affinity is likely the common denominator between them! For years, researchers have known that bacterial and viral infections caused several types of cancer, so it may not be so farfetched to stretch causation to fungal overgrowth. And from there, we have another powerful argument linking sugar and cancer.

Research has long shown that infections by microorganisms can contribute to or even cause cancer. In 1994, the International Agency for Research on Cancer classified the bacterium Helicobacter pylori (H. pylori) as a carcinogen, and since then it has been increasingly accepted that colonization of the stomach with H. pylori is an important cause of gastric cancer.In 2003, Danish researchers linked the Epstein-Barr virus the cause of mononucleosis, to a malignant lymphoma known as Hodgkin’s disease. Human papilloma virus (HPV) is known to cause cervical cancer and some oral cancers. In 2012, scientists at the University of Liverpool identified a type of Escherichia coli (E. coli) bacteria that is linked to the development of colon cancer . And Hepatitis B virus (HBV) is a proven cause of about 80% of liver cancer (primary hepatic carcinoma).

According to an article published in The Lancet, of the 12.7 million new cancer cases that occurred worldwide in 2008, about 16% (around 2 million) were attributable to infections. Helicobacter pylori , hepatitis B and C viruses, and human papilloma viruses were responsible for 1.9 million cases, mainly gastric, liver, and cervical cancers. 9

The fungal infection connection also seems to have some history. As long ago as 1913, Nobel Laureate Dr. Johannes Fibiger of Denmark proved the connection between cancer and fungal growths when he fed parasitic larvae-carrying cockroaches to healthy rats. The rats subsequently developed “cancer swellings.” In a comprehensive study published in 1950 by Lankenau Hospital Research Institute and the Institute for Cancer Research (Philadelphia, Pennsylvania), researchers found fungi present in virtually all cancerous tumors they examined. Fungi were readily isolated from all types of transplanted, induced, and spontaneous mouse and human tumors and from mouse leukemias. Some doctors actually implicate fungi as a cause of leukemia. In 1999, Meinolf Karthaus, MD, reported on three different children with leukemia who suddenly went into remission upon receiving a triple antifungal drug cocktail.

Over the years, many researchers have documented the co-existence of cancer and a specific fungal overgrowth known as Candidiasis ( Candida albicans ) with correlations of 79% to 97%. At least 10 other researchers suggested a causal link between Candida and cancers of the larynx, lung, esophagus, tongue, intestine, pancreas, and lymph system.

Italian oncologist Dr. Tullio Simoncini also believes in a strong connection between cancer and Candida . He is the author of Cancer Is a Fungus, a book in which he details both his theory and different protocols for different tumor types. Dr. Simoncini points out that at the most basic level cancer and yeast fungus have very similar (if not identical) characteristics.

Simoncini believes categorically that Candida causes fungal infections that lead to cancerous tumors in humans. In fact, he stated that Candida is found in about 97% to 98% of cases. According to Simoncini, although Candida in cancer patients is usually interpreted as a consequence of cancer and its treatment, it is incorrect to think that the cancer comes first, and then the Candida. In fact, the Candida fungus is present first, penetrates the organism, and causes the tumor.

Based on his theory that the formation and spread of cancerous tumors is simply the result of a fungus, Dr. Simoncini has pioneered a cancer therapy using the strongest antifungal substance, sodium bicarbonate (NaHCO3), as a means to treat cancer. His therapy is harmless and appears to be very effective. His book appendix includes 18 impressive clinical case regressions, including lung cancer, liver cancer with lung metastasis, Ewing’s sarcoma, ”terminal” cervical cancer, non-Hodgkin’s lymphoma, advanced melanoma with brain metastasis, and breast cancer that had spread to lung, liver and bone.

The Hgt4 protein of Candida albicans is a high-affinity glucose sensor that contributes to the virulence of C. albicans . Said simply, Candida organisms need sugars like glucose, fructose and sucrose to provide them with energy to grow and to build their cell walls, which are comprised 80% of carbohydrates. However, those sugars serve one extra purpose. They enable the Candida yeast cells to switch to their more virulent, fungal form. This form of Candida is faster-growing and develops long branches that can cause Leaky Gut Syndrome. (If you have noticed persistent Candida symptoms, chances are the Candida in your gut has switched to its fungal form.)

If yeast is the infection at the heart of most cancer cells and sugar helps feed yeast, then the rise of cancer rates over the last 80 years could be due to the modern carbohydrate-rich diet. Carbohydrates in the form of processed white sugar, refined flour, high-fructose corn syrup and other foods with high-glycemic counts feed the yeast fungus so that it grows rapidly and disrupts the normal balance of good and bad flora, lowering immune response. This terrible combination of yeast overgrowth, reduced immune response, and dramatic increases in refined sugar consumption may be the triple “whammy” that has spurred the cancer epidemic. In addition, the widespread use of antibiotics, particularly in the UK and US, kills all bacteria – including the good bacteria (probiotics) needed to fight disease, fungus and cancer.

So are all sugar-holics doomed to get cancer? Not necessarily. Just as eating lots of sugars can promote a Candida overgrowth, restricting sugars can slow down or reverse Candida. A 2011 study found that carbohydrates were “indispensable” both for cellular growth and for the transition into fungal form. Depriving the Candida of its food source can slow its growth and prevent that transition from happening.

For additional information on sugar and cancer: Immune Perspectives, Vol X, no 2  in our e-store