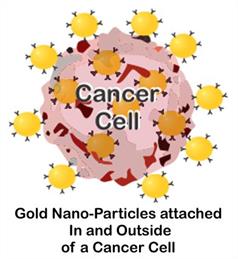 People are always asking my opinion about the latest, greatest cancer treatments. Well, here is a fascinating one-minute video on new cancer technology that literally explodes cancer cells without harming healthy cells. In fact, it is supposedly 17 times more effective than conventional cancer therapy and can be used when cancers are inoperable or resistant to chemo and radiation! Check out the video and then I’ll share my thoughts below.

Like many of the other 6.5 million people who have “liked” this video, you may be quite skeptical about this treatment. Is this just unfairly creating false hope? How many years will it take before animal experiments are applied in humans? How many desperate patients will lose their lives waiting? How expensive will treatment be? Will it only be available to a select few? Is this just another example of cancer corporate greed pricing a therapy out of the reach of the average patient? Is the treatment really safe or are there unpredictable side effects? If it is a miracle cure, will it get blocked by vested interest groups from the oncology establishment? (Indeed more people live off cancer than die of it!) Is nanotechnology fact or fiction?

Nanotechnology is fact. Nanoparticles are at the leading edge of the new and rapidly growing field of nanotechnology, which has grown exponentially over the last decade and is being applied now in many branches of science and medicine, including cancer.

Applications of Nanotechnology in Cancer

Gold nanoparticles are being investigated as promising agents for cancer diagnostics and therapy in numerous ways — as drug carriers (selectively targeting cancer cells), as photothermal agents (killing cancer cells with heat produced by light), as contrast agents (for better imaging of tumors) and as radiosensitisers (making cancer cells more susceptible to ionizing radiation).

Photodynamic Therapy: The video you just watched describes University of Copenhagen Niels Bohr Institute research demonstrating that laser irradiation of tiny nanoparticles injected directly into tumors can destroy the cancer from within. Photodynamic cancer therapy works with nanotechnology to destroy cancer cells by laser-generated atomic oxygen. Since cancer cells take in a greater quantity of the special oxygen-producing dye as compared with healthy cells, only the cancer cells are destroyed when exposed to laser radiation.

Effectiveness Assessment: If you have committed to undergo toxic treatment, wouldn’t be great if you could know within a few hours instead of several months whether the treatment is effective? Conventional detection methods — such as PET scans, CT and MRI — usually cannot detect whether a tumor is shrinking until you have received multiple cycles of therapy. Well, Brigham and Women’s Hospital researchers report that nanotechology offers a new way to judge the effectiveness of chemotherapy in as few as eight hours after treatment. Using a nanoparticle that delivers a drug and then fluoresces green when cancer cells begin dying, researchers were able to visualize whether a tumor is resistant or susceptible to a particular treatment much sooner than with currently available clinical methods. The technology can also be used for monitoring the effectiveness of immunotherapy.

Drug Targeting: Have you undergone intensive cancer treatment only to have a recurrence within a few years? Recurrences and tumor spreading are likely due to cancer stem cells that can be tough to kill with conventional cancer drugs. But now researchers have designed nanoparticles that specifically target these chemo-resistant stem cells. In animal studies, the nanoparticle treatment worked far better than the drug alone.

Monoclonal Antibodies: Nanoparticles, such as the ones used in the laser-induced explosion on the video, can be engineered to have monoclonal antibodies attached to them. Monoclonal antibodies are able to recognize a single antigen (surface protein) on the cancer cell, bind to it, and start an immune response. This allows for selective treating of the cancer while sparing healthy cells.

Enhanced Diagnostic Imaging: Nanoparticles are not only valuable for targeting and treating cancer; they can also be used to help increase image visibility in both MRI and ultrasounds.

Although the National Cancer Institute’s (NCI) Alliance for Nanotechnology in Cancerprogram has been successful in researching nanotechnology in the laboratory, of course the ultimate measure of the program’s success lies in the whether laboratory discoveries can be applied in the clinic. For that purpose, NCI established six Centers of Cancer Nanotechnology Excellence (CCNEs), where nanotechnology-enabled diagnostic and therapeutic agents are already in human clinical trials. Here are a few examples:

While nanotechnology is extremely promising and appears to be nearly within reach for those with cancer, we should remember that our bodies are already programmed with an incredibly sophisticated system of cell signaling and biochemical pathways programmed to destroy cancer cells. Most of us can enjoy excellent health simply by getting out of our own way, not interfering with that system through poor lifestyle choices, and allowing our bodies to do their jobs unhampered to help us to regain and maintain health.