Does Alcohol Cause Cancer?

Does Alcohol Cause Cancer? 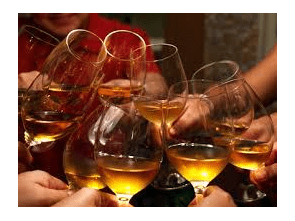 Wine-lovers often revel in the knowledge that resveratrol compounds in red wine confer anti-cancer protection. However, it’s not the alcohol that is beneficial. You can get plenty of resveratrol in grapes and berries, without including the alcohol. And that is hugely important. Most people know that drinking alcohol comes with health risks, but it appears that alcohol is more dangerous than we previously thought. After more than 10 years of research, scientists have concluded definitively that alcohol causes cancer.

Alcohol is the common term for ethanol or ethyl alcohol, a chemical substance found in beer, wine, and liquor (as well as in some medicines, mouthwashes, household products, and plant essential oils). Alcoholic beverages vary greatly in the amount of alcohol content:

According to the National Institute on Alcohol Abuse and Alcoholism, a standard alcoholic drink in the United States contains 14 grams of pure alcohol, generally the amount found in:

Research evidence indicates that the more alcohol a person drinks—particularly regularly over time—the higher his or her risk of developing an alcohol-associated cancer.

According to a new literature review published online on July 21 in Addiction and on July 27 in Medscape Medical News, there is strong epidemiological evidence that alcohol causes at least seven different types of cancer.
Study author Jennie Connor, MPH, of the Department of Preventive and Social Medicine at the University of Otago in New Zealand, confirmed that drinking alcohol can cause cancer of the pharynx, larynx, esophagus, liver, colon, rectum and breast.

The International Agency for Research on Cancer (IARC) has long identified alcohol consumption as being causally associated with these cancers.  Based on data from 2009, an estimated 3.5 percent of all cancer deaths in the United States (about 19,500 deaths) were alcohol related.  In 2012, alcohol was estimated to have caused approximately half a million cancer deaths (nearly six percent) worldwide. The 2014 Report on Carcinogens issued by the National Toxicology Program of the US Department of Health and Human Services lists consumption of alcoholic beverages as a known human carcinogen. In 2015, scientists at the Harvard University School of Public Health and Brigham and Women’s Hospital reported in the British Medical Journal on a 30-year review of nearly 136,000 individuals. Overall, those who drank more showed a higher risk of cancer. Among women, even one drink a day contributed
to a 13% higher risk of developing alcohol-related cancers, primarily breast cancer. For men, up to two drinks a day also increased the risk of certain cancers. The risk is even higher for men who smoke, or had smoked and quit, than for non-smokers.

Clear patterns have emerged between alcohol consumption and the development of specific types of cancer:

How Does Alcohol Increase the Risk of Cancer?

Scientists have identified multiple ways that alcohol may increase the risk of cancer, including the following mechanisms:

Is it Too Late if You’re Already a Drinker?

What happens to cancer risk after a person stops drinking alcohol? If you quit drinking or cut back on alcohol intake, you definitely have a chance to lower your cancer risk, but it may take many years before your risk drops down to that of a non-drinker.

A pooled analysis of 13 studies of persons with cancer of the mouth and throat found that alcohol-associated cancer risk did not begin to decrease until at least 10 years after stopping alcohol drinking. A review of five studies of ex-drinkers found that the risk of esophageal cancer did not approach that of never-drinkers for at least 15 years.

Bottom Line: If you don’t drink, don’t start.  If you do drink, stop now or at least cut down. Even drinking half your normal portion or half as often could cut your cancer risk by 50%. And if you’re a smoker, stop now!