Does Red Meat Cause Cancer?

Does Red Meat Cause Cancer? 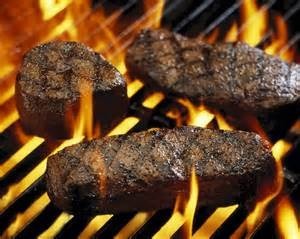 Perhaps you have heard that eating meat – particularly red meat and processed meat — can cause cancer. But what meats are the most dangerous, how severe are the risks, and what steps can we take to minimize these risks?

To be clear, ‘red meat’ here refers to beef, pork, lamb, and goat from domesticated animals and ‘processed meat’ refers to meat preserved by smoking, curing or salting, or the addition of chemical preservatives.

Meats like sausages and bacon are processed with nitrates and nitrites to enhance flavor and color, and retard spoilage. According to the Food and Drug Administration (FDA), “Nitrites and, less often, nitrates are used as preservatives in foods such as cured meats, for example, bacon and salami.” The FDA goes on to say that “Exposure to higher levels of nitrates or nitrites has been associated with increased incidence of cancer in adults, and possible increased incidence of brain tumors, leukemia, and nasopharyngeal (nose and throat) tumors in children in some studies but not others.”  The FDA also mentions that “The World Health Organization International Agency for Research on Cancer (IARC) ranked nitrates and nitrites high on the priority list for upcoming review of possible carcinogenicity.”1

Recently, researchers found that cooking both processed meats and non-processed red meats at high temperatures causes other carcinogenic chemicals to form. The chemicals in question are HCAs (heterocyclic amines) and PAHs (polycyclic aromatic hydrocarbons). Studies show that the higher the cooking temperature, the higher the amount of HCAs and PAHs that are produced. And the more of these well-cooked meats that are consumed, the higher the risk is for getting cancer. The risk is particularly great for colorectal cancer (cancer of the colon and/or rectum). In developed countries—particularly Australia and New Zealand, Europe, and North America–colorectal cancers are the third leading cause of death among men and the second in women.2

In one U.S. study, 39,000 men and women from ten different U.S. states had their diets assessed using a 137-item food questionnaire.3 In addition, the participants all agreed to submit to a sigmoidoscopy, an exam used to evaluate the lower part of the large intestine (colon). The group was questioned on how often they ate red meat, how much of it they ate, and how they cooked it. They were asked specifically about doneness level: Were their steaks and hamburgers cooked rare, medium-rare, medium, medium-well, well-done, or very well-done? Were their pork chops, ham steaks, sausage, hotdogs, and bacon cooked just until done, well-done/crisp, or very well-done/charred? Were their cooking methods bake/roast, pan-fry, grill/barbecue, microwave, or oven-broil? An increased risk of colorectal adenoma (non-cancerous tumor) was shown to be associated with eating well-done red meat, bacon, and sausage. The higher the intake of well-done red meat, bacon and sausage, the higher the risk of adenoma of the colon.

In 2013, it was further pointed out that high intakes of very specific types of red meat were associated with a higher ­risk of specific types of cancer. In a study of 54,000 Danish participants, the risk for colon cancer was found to be significantly elevated for higher intake of lamb whereas the risk for rectal cancer was elevated for higher intake of pork.4

This year, another, smaller study was conducted with patients already diagnosed with colorectal cancer. Their diets were compared with those of unaffected siblings and spouses.5 In this study, diets high in pan-fried beefsteaks and in oven-broiled short ribs or spareribs revealed an increased risk for colorectal cancer.

What is evident from these studies is that high consumption of red meat and processed red meat cooked at high temperatures poses some level of risk for both cancer and for pre-cancerous symptoms of the lower intestines. What is lacking are precise dietary and cooking guidelines to help curb these risks.

What you can do

The experts continue to study our diets, because they have not yet reached an agreement about exactly how much processed or red meat is safe to eat, or for exactly how long it should be cooked for healthiest consumption. But based on what is known so far, there are several conservative cooking and dietary recommendations that may help to minimize your risk of cancer:

As meat consumption increases throughout the world, and the number of people diagnosed with cancer also increases, hopefully, researchers will continue to devote more time and resources to help people align dietary choices with overall good health.

Editor’s Note: This well-written article provides a good case for reducing our intake of heavily cooked and processed red meat. I would add a few observations:

There are over 35 particular foods, including apples, beets, cabbage, garlic, leeks, oregano, turnips, and watercress, that fight colon cancer via dozens of different mechanisms. To learn more about specific foods that turn off colon and other cancers, you may wish to read BeatCancer.org’s new publication, Alphabetical Beat Cancer Diet Guide

[7] Agency for Toxic Substances and Diseases Registry (ATSDR). Nitrate/Nitrite Toxicity. What Instructions Should Be Given to Patients to Prevent Overexposure to Nitrates and Nitrites? http://www.atsdr.cdc.gov/csem/csem.asp?csem=28&po=14

[8] The World Cancer Research Fund and the American Institute for Cancer Research. Food, Nutrition, Physical Activity and the Prevention of Cancer: A Global Perspective. 2007. http://www.aicr.org/assets/docs/pdf/reports/Second_Expert_Report.pdf