FIRST THING TO DO FOR CANCER: CUT YOUR IRON-Part 1

FIRST THING TO DO FOR CANCER: CUT YOUR IRON-Part 1 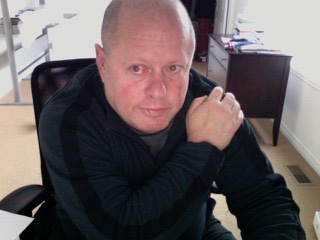 Cutting Iron is one of the most important non-invasive treatments for cancer: it includes not smoking, eating a plant- based diet, and blood donation.

Contrary to conventional wisdom, most people have too much iron; few have too little. 94% of us have too much iron. In a study of 20,000 women over 19 years, more iron supplements meant a higher death rate(1 ). We get too much iron from meat (including fish) cigarettes, and
fortified foods. Cutting out meat and cigarettes and donating blood can have enormous benefits. Eating vegetables slows iron uptake into the body(2) while meat consumption accelerates it. Iron is linked with most forms of cancer because iron forms free radicals at an incredibly fast rate via the “Fenton reaction”(3). This process is called “oxidation”, exactly as rust on an old car is called “oxidation”. High iron equals more cancer(4) and more death. In one study, those with the highest levels of iron were associated with 3 times more cancer deaths!(5) Yet we all need iron to transport oxygen in our body in the form of hemoglobin. The excess iron is stored in a molecule called ferritin. Too much ferritin in your blood, appears to be linked to cancer and lower life expectancy. A study of 8000 people in Denmark over 23 years showed that the higher your ferritin, the shorter your life(6) and much of the shortened life expectancy comes from cancer. The chart shows that you lose about 3 years for each level of iron, until the highest level chops about 18 years off your life from increased cancer and heart disease.

Iron causes damage by generating free radicals which cause mutation, chromosome damage and cell proliferation. Then iron suppresses our own body’s ability to destroy cancer cells, called “apoptosis”. Finally, iron is an important nutrient for feeding the spread and growth of cancer(7).

Dr. Leo Zacharski took 1200 patients that had a disease of clogging of arteries. Half the group lowered their iron through BLOOD DONATIONS. The other half continued as normal. After 5 years, the IRON LOWERING group had 35% fewer cancers and 61% fewer deaths from cancers(8).

In another study, 2 blood donations per year was associated with 36% lower rate of death(9).

A pack of cigarettes has about 10mg of iron(10) (11). We normally eat about 10 mg per day from our food. So, cigarettes double our iron ingestion. Long term smokers and even ex-smokers have about twice the ferritin levels of non-smokers(12). Why ex-smokers? Because our kidneys don’t remove iron. So once iron is in you, it stays a long time.

You can detect lung cancer just by measuring the iron in your breath moisture(13) (14).

CONCLUSION: Dr. Zacharski, a famous expert on this topic agreed with me when I proposed that the biggest toxin in cigarettes is iron. SO STOP SMOKING.

Since the only means of removing iron, monthly when women stop their periods, their iron levels go way up(15). 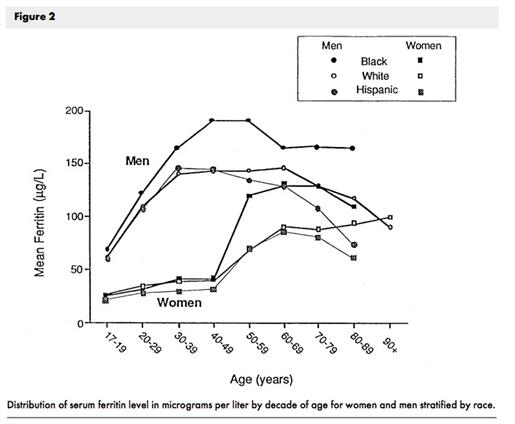 Women’s iron levels go up during menopause, when their period stop.Men’s go up from age 17-40 which might explain why their cancer rates are higher at a younger age.

VEGETARIANS HAVE MUCH LOWER IRON LEVELS:

Vegetable consumption decreases the availability of iron to go into your body. Meat eaters have much more iron uptake as meat-based iron-called “heme-iron” is more easily taken into your body. So, eating vegetables slows down the uptake of iron. Vegetarians in one study had about ½ the ferritin levels of meat eaters(16).

Junk or processed food is unhealthy, as many of us know. But many processed foods have added iron. The iron was added because in the 1940s, studies mistakenly overestimated iron-deficiency according to Dr. Zacharski.

GO TO PART 2: In part 2, we will explore what to do, what levels are safe, and how iron is linked to skin aging.

[Warning:This is not medical advice, and no treatment should be done without the advice of medical professionals. Note that measuring iron levels is much more complex than ferritin measurements, as some iron as ferritin can be sequestered in various organs and ferritin can go up during inflammation]

[2] Many phytochemicals such as phytic acid are natural chelators, and bind the iron which impedes its uptake into the body.

[9] In this study, they made a crude estimate of the “healthy donor affect” assuming that if people lose their health they stopped donating. This reduced
the effect from 18% per donation per year, to about 7%. Nonetheless, they found that this adjustment may not have been necessary. Source: Ullum H, Rostgaard K, Kamper-Jorgensen M, Reilly M, Melbye M, Nyren O, Norda R, Edgren G, Hjalgrim H: Blood donation and blood donor mortality after adjustment for a healthy donor effect. Transfusion 2015, 55(10):2479-2485.