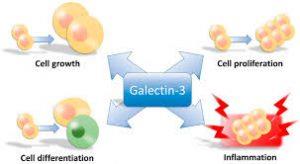 In my last article on prostate cancer, I discussed the pros and cons of PSA testing. Now I want to talk about another tumor marker which, if elevated, can be a very effective biomarker for prostate and other cancers, and the way that it can be targeted with an all-natural therapy.

Galectin-3 is a biologically active protein that has been shown to be involved in many cellular processes like cell cycle, adhesion, activation, differentiation, and apoptosis. Average galectin-3 levels are less than 12 ng/ml. When present at normal levels in the circulation, galectin-3 plays a vital role in cellular growth, repair processes, immunity and other critical functions. However, like many other biologically active molecules, balance is key, as elevated circulating galectin-3 can actively fuel a number of conditions including inflammation, fibrosis, heart disease, stroke, and cancer.

In 2011, the galectin-3 serum assay was approved by the FDA as an active biomarker for cardiovascular disease and congestive heart failure. However, research shows it can be used for assessing cancer risk and progression as well. Among the numerous pathogenic processes driven by excess galectin-3 are tumorigenesis and metastasis. Galectin-3 plays an active role in cancer cell aggregation, angiogenesis, inhibition of apoptosis, and immune evasion. Studies comparing circulating galectin-3 levels in healthy controls with those in patients with various types of cancer have shown significant galectin-3 increases in patients with melanoma, lung, breast, colorectal, ovarian, prostate, and head and neck cancers, as well as non-Hodgkin’s lymphoma.

A standard laboratory test for galectin-3 levels costs about $300, but virtually every insurance company (including Medicare) should cover the test.

Within the fast-growing body of research on galectin-3 in cancer and other conditions, one therapeutic agent has emerged as the most-researched galectin-3 inhibitor: Modified Citrus Pectin (MCP). Regular citrus pectin is a complex polysaccharide fiber derived from citrus peel. In MCP, these large molecules are modified enzymatically, reducing their weight. As a result, MCP is able to enter the bloodstream from the digestive tract and bind to excess galectin-3 in the circulation and at tissue sites, reducing cancer angiogenesis and metastasis. MCP can improve immunity, activating T-cells and Natural Killer cells, and bind up heavy metals and other toxins.

A number of studies have found that MCP inhibits cancer — in particular prostate cancer.

A 1995 animal study, published in the Journal of the National Cancer Institute, found that MCP blocked prostate cancer adhesion to endothelial cells, reducing lung metastasis by 50%.3

A 2003 phase II clinical study published in Prostate Cancer and Prostatic Diseases analyzed the effects of MCP in men with relapse of prostate cancer after local therapy. Results showed that five grams of MCP three times per day for one year more than doubled PSA doubling time in 70% of subjects.5

A 2007 clinical study published in Clinical Medicine: Oncology found that cancer patients with advanced solid tumors who were treated with MCP stabilized and experienced improved quality of life.6

MCP can also be synergistic with chemotherapy. It has been shown to increase the efficacy of certain chemotherapy drugs and reduce side effects. For example, Doxorubicin (Dox) is an effective anti-cancer drug which can be useful in treating advanced prostate cancer, but it’s also a very toxic one with the potential to cause severe heart and immune system damage; it can be difficult to give patients a sufficient dose to inhibit the cancer without causing significant side effects.

However, a study published in the journal Cell Biology International showed that combining Dox with MCP increased the anti-cancer activity of both agents. MCP synergistically enhanced the cytotoxic effects of Dox in both androgen-dependent and androgen-independent prostate cancer, allowing for a significant reduction in the dosage of Dox.7

The Researched Brand of MCP

The majority of studies on MCP use a specific brand, developed by Dr. Isaac Eliaz, who first started using MCP to treat patients in the 1990s. It’s called PectaSol-C Modified Citrus Pectin by EcoNugenics, and I have been recommending it for years. The product has been reviewed in about 40 published papers and suggested dosages are between 5-15 grams per day. The company has agreed to offer BeatCancer.org clients a 15% discount on their entire line of products , including formulas for prostate health, breast health, immune support, hormonal support, and heavy metal detoxification, among others. Just enter the coupon code BCO15 when you place your order. (For orders of $200 or more, use the code BCO20 and get 20% off).

One of the keys to success in integrative cancer treatment — not just for prostate cancer but many others as well — is the strategic application of individualized protocols based on a diverse range of diagnostic and therapeutic approaches. The galectin-3 biomarker is a unique example of both. It serves as an important diagnostic tool which is easily quantifiable. It’s also becoming a powerful therapeutic target for numerous conditions, with modified citrus
pectin as a leading agent recognized for its ability to block its tumorigenic, metastatic and pro-fibrotic actions in the treatment of cancer and numerous chronic conditions.