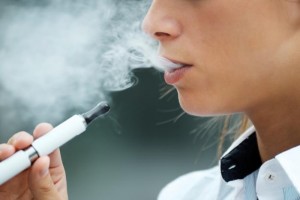 Are you a smoker who has tried to kick the habit? Have you moved to e-cigarettes as a safer alternative? Or are you a non-smoker who believes this trend can help prevent people from smoking regular cigarettes and help others to quit? Do you think switching to e-cigarettes can protect the lungs of family members? Think again!

Electronic or e-cigarettes, increasingly popular in recent years, are plastic or metal tubes slightly larger than traditional cigarettes. There is nothing to light since they run on lithium batteries. E-cigarettes work by heating a nicotine-containing liquid to create a vapor that users inhale. They’re generally considered safer than regular cigarettes, because they are smoke-free and tobacco-free; however, they are not nicotine-free. In fact, some contain nicotine levels comparable to those in regular cigarettes.

According to the American Lung Association, cigarette smoke contains more than 7000 chemicals, 69 of which are known carcinogens. Because some research has suggested that the levels of most toxicants in vapor are lower than the levels in smoke, e-cigarettes have been deemed to be safer than regular cigarettes.

Some public health experts have welcomed the innovation as a way to prevent young people from starting to smoke traditional tobacco cigarettes and to help longtime smokers give up the habit entirely. Others fear the e-devices will addict nonsmokers to nicotine and eventually lead to more people smoking. And many health experts believe that because so little research has been done on e-cigarettes, they may pose unknown risks.

One of those risks has just been revealed. New research reported in the New England Journal of Medicine on Jan. 22 indicates that vapor produced by electronic cigarettes can contain a surprisingly high concentration of formaldehyde, a known carcinogen to which long-term exposure is a recognized cause of lung cancer!

David Peyton, a chemistry professor at Portland State University who helped conduct the research, says that the type of formaldehyde generated by e-cigarettes could increase the likelihood it would get deposited in the lung. Peyton’s group found that formaldehyde from e-cigarettes is at concentrations between five and 15 times higher than in regular cigarettes.

The e-cigarette industry immediately dismissed the findings.So what else is new?

Harvey Simon, MD, Harvard Health Editor, expressed concern that the nicotine amounts in e-cigarettes can vary significantly: “An FDA analysis recorded nicotine doses between 26.8 and 43.2 micrograms per puff. It also detected nicotine in products labeled as nicotine free.” Simon is also concerned about other chemicals delivered by electronic cigarettes, including diethylene glycol (a highly toxic substance), various nitrosamines (powerful carcinogens), and other compounds suspected of being harmful to humans.

In fact, this past week the World Health Organization called for a ban on indoor use of e-cigarettes in workplaces, restaurants and other public spaces. The report stated that the vapors “pose a serious health threat to adolescents and fetuses and increase exposure of nonsmokers and bystanders to nicotine and a number of toxicants.” The report continued, “Some studies have found that bystanders absorb more nicotine from vapor than from tobacco smoke.”

I’m not always fond of Food & Drug Administration (FDA) regulations, especially in the natural supplements arena, but this time, I am pleased to have them step in. A group of 29 State Attorneys General agrees. They have asked the FDA to tighten regulations on electronic cigarettes — specifically to prohibit flavored e-cigarettes and to restrict advertising and marketing in the same manner it does for traditional cigarettes.

“E-cigarettes have all the addictive qualities of regular, combustible cigarettes, yet they are completely unregulated by the FDA,” stated New York Attorney General Eric T. Schneiderman. “Each year, electronic cigarette companies spend millions of dollars advertising their product — often on prime-time television — glamorizing smoking in the same way combustible cigarettes did before those commercials were banned.”

While the Food and Drug Administration is in the process of deciding just how strictly it should regulate e-cigarettes, we as consumers should make up our own minds. BeatCancer.org recommends NO cigarettes, traditional or electronic.  And if you do smoke, there are many non-toxic ways to quit. Check out Smokefree.gov, a website developed by the National Cancer Institute.