INTRO TO A COACH: Donna Deliva

INTRO TO A COACH: Donna Deliva 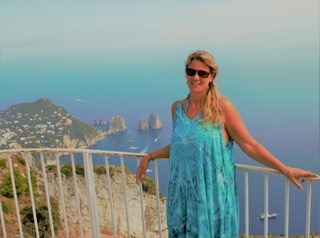 I grew up in a small country town in Canada. I was the third in line of 4 children and the only girl. I had parents that loved me, although my upbringing was dysfunctional to say the least. Of course, you never know that when you are going through it.

My parents divorced when I was 10. My father moved away to start a new life and I only saw him once a year. That was always hard on me. He died when I was 24 leaving me heartbroken and unable to speak of him for years.

My mother ended up taking out all her misplaced frustrations out on me. I ended up with being raised with a lot of guilt and never feeling good enough or truly loved and accepted. During that time, I also was sexually abused by a family member.

It wasn’t until I was in my late 20’s that I was questioning my own mother’s mental health. Which in turn brought upon my own guilt in questioning her.

Even as an adult I never felt good enough for my mother. I never had any kind of true bond with her. She passed away at 67. It was then, after finding and reading her diaries, that I realized my assumptions about her mental state were correct.

In 2005, I got endocarditis from a rare staph bacterium. It was then I found out I had a heart defect. Six weeks after that, I had a stroke.

At 35, I was diagnosed with cervical/lymph node cancer. At the same time, I found out I was 8 weeks pregnant with my last. I had my son and underwent a radical hysterectomy 3 months later. I was told they “got everything”, that all margins were clear.

I was completely devastated as I knew no other life. There was also a side of me that was yearning for new adventure.

After I picked myself up, I got on with it. I had two teenagers and an infant to take care of. That was my number one priority. They needed a safe place and I was only going to make life better.

A year had passed, I made huge strides in my own self confidence and met a man that in 5 years would become my second husband.

I gave my whole heart and soul to this man. But I lost myself in him as well. I lived 4 years of marriage in a “fright” state. Crying and nervous all the time. His continual lying, cheating and alcohol abuse put my mind and body in a constant toxic state.

I knew deep inside something was wrong. I thought at first it was an ulcer. But I didn’t have any inner strength to take care of myself. An emergency colonoscopy revealed an orange size tumor. It was removed 2 weeks later along with 30 lymph nodes. Half of which were “full” of cancer. Putting me at stage 3.

I was thrown to the oncologists without time to think or absorb. Thinking I had no choice and no where to turn I started chemo. I couldn’t tolerate any of the drugs. I had allergic reactions to all 3 combinations that were tried. The third one sent me into anaphylactic shock.

At my final appointment with my oncologist, I was told there was “nothing they could do for me”.

I was in the fight of my life. It was then I started this journey. A two-and-a-half-year journey I have now been on. I changed everything in my life. I left my husband, I sold my beautiful home, my cottage, everything.

I now live in peace. Everyday, I had to learn a new way to think, to eat and live. I started the Gerson Theory. I learned how to meditate and started yoga 2-3 times a week.

I believe the changes I have made are what is keeping me in the best health of my life.

I have so much I want to share and feel there are many people I can help with what I have learned.

Now as a Certified Holistic Cancer Coach, I feel I can finally make a difference in the life of those who may feel the need for a little guidance.