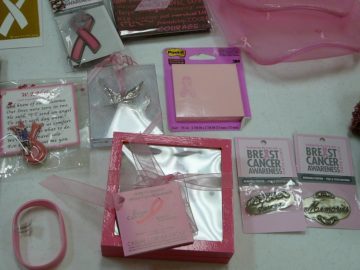 —- adapted from an article by Ralph Moss, PhD

Recently we learned that in order to fight cancer, we should buy a bucket of Kentucky Fried Chicken. This past spring, the chicken purveyor and Susan G. Komen for the Cure teamed up on a “Buckets for the Cure” campaign at 5000 KFC restaurants nationwide “to raise funds and spread breast cancer awareness.” “Spread breast cancer” may be more on target.

Participating franchises sell specially designed pink buckets of chicken, and KFC then donates 50 cents for every bucket that is ordered during the promotion period. The names of “breast cancer survivors and those who have lost their battle with breast cancer will be listed on the sides of the bucket.”

KFC has been in the news recently for a great innovation in dining: the “Double Down.” This gluten-free all-meat sandwich consists of two pieces of bacon, two slices of cheese, and the famous Colonel’s sauce — which contains soybean oil, sugar, chicken fat, MSG, etc. — packed between two fried chicken fillets! This “breadless wonder” was launched across the entire US in April of this year.

Then there’s the acrylamide issue. In 2000, Swedish scientists discovered this chemical in such foods as potato chips and french fries. The US Food and Drug Administration estimates the acrylamide content in KFC french fries at 117-313 parts per billion, a very high amount.

Acrylamide is classified as a “probable human carcinogen.” In rat studies, it increased the incidence of breast cancer, as well as thyroid tumors and scrotal mesothelioma. In humans, there is an increased risk of ovarian and endometrial cancers, renal cell cancers, and mouth cancers. In 2009 a Dutch study showed a positive association between dietary acrylamide intake and breast cancer. The highest consumption of acrylamide correlated with a 43% increase in breast cancer in women with estrogen or progesterone receptor positive cancers.

She also points out that KFC, like most fast food chains, is overwhelmingly present in poor and minority communities that tend to have higher breast cancer mortality rates…. It is unfortunate that Komen has chosen to associate itself with products that may, ironically, be linked to increased incidence of breast cancer!

At BeatCancer.org, we are not raising money for research and we are not searching for the “cure.” Prevention is the cure! There’s plenty of research already published on diet and breast cancer, and we teach women every day how to apply that science in their lives — whether that be for primary prevention, prevention of recurrence, or creating an inner environment that will no longer host cancer.

According to Barbara Brenner of Breast Cancer Action, this is “an egregious example of ‘pinkwashing’ which occurs when a company purports to care about breast cancer by promoting a pink ribboned product, but manufactures products that are linked to the disease….Make no mistake, every pink bucket purchase will do more to benefit KFC’s bottom line than it will to cure breast cancer.”