Oral Contraceptives Part I: Get the Facts Before You Decide

Oral Contraceptives Part I: Get the Facts Before You Decide 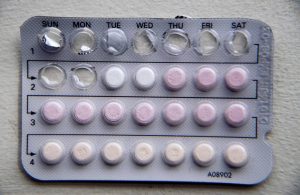 The first oral contraceptive became available to U.S. women in 1960. Since then, millions of women have used “the Pill” in varying forms. It is by far the country’s leading form of birth control today, with roughly 11 million American women currently using it in some way. In fact, in an article in the late 1990’s, the magazine The Economist called the birth control pill an invention “that defined the 20th century.” But is the convenience that oral contraceptives provide worth the health risks?

Oral contraceptives are similar to synthetic hormone replacement therapy (HRT) in that they adjust the levels of estrogen and progesterone in your body. By artificially mimicking natural hormones through the input of synthetic estrogen and sometimes progestin (the synthetic version of progesterone), they prevent your ovaries from releasing eggs. They also thicken the mucus in the cervix to block sperm and thin the uterine lining, making it difficult for an egg to implant in the uterus.

Birth control pills and other non-oral contraceptives like the Patch (Ortho Evra) and the Depo-Provera injection (depo-medroxyprogesterone or DMPA) all work through this basic principle, although Depo-Provera also interferes with hormone signaling. Unfortunately, all produce notorious side effects similar to those of HRT.

Oral Contraceptives Can Damage Your Health

Oral contraceptives are a known carcinogen. But before we dive into how oral contraceptives raise your risk of breast and other cancers specifically, let’s take a look at some facts when it comes to the Pill, the Patch and Depo-Provera in general:

Of course, the biggest risk of all for those who use birth control pills is cancer. Oral contraceptives are classified as a Category 1 carcinogen by the World Health Organization. As with tobacco, asbestos and diesel exhaust, the chances of developing cancer if you are on synthetic birth control are a lot higher than if you are not. Studies have shown that women who use oral contraceptives are especially at risk for cervical , breast and liver cancer. That risk is amplified for a woman who chooses the birth control patch (Ortho Evra) since with that method a woman will absorb up to 60 percent more synthetic estrogen than if she uses traditional oral contraceptives.

How exactly do estrogen-based contraceptives cause breast cancer ? First of all, estrogen acts as a “mitogen,” stimulating breast tissue to increase the number of cell divisions (called mitoses). Secondly, some of estrogen’s metabolites can act as genotoxins that can lead directly to DNA damage.

If you are considering using synthetic birth control, you may do well to heed the warning given by the infamous 2002 federally-funded study organized by the Women’s Health Initiative. The project looked at the effects of synthetic hormone replacement therapy (HRT) on over 150,000 U.S women and soon made the clear connection between synthetic (not biological) HRT, breast cancer, stroke, blood clot and heart attack. The findings were publicized widely in national media at the time and, as a result, millions of peri- and postmenopausal women who were already using HRT stopped taking them. Interestingly, the next year, the incidence of breast cancer went down by seven percent!

Other studies have found that if your HRT or synthetic birth control method contains progestin, your risk of breast cancer could go up eight percent per year and as high as 30 percent with four years of use.

We are already exposed to so many xeno-estrogens (chemical estrogens) every day from commercial meats and dairy, household cleaners and pollutants in the environment, that adding the extra toxic burden of synthetic, hormone-dependent birth control just doesn’t make sense for anyone wanting to live a healthy, vibrant, cancer-free life.

If you must use synthetic contraceptives, however, be sure to stay away from the heavy-hitters like the Patch and Depo-Provera. The Depo-Provera injection in particular has been found to lead to significant bone mineral density loss. A study published in the May 2004 issue of the Journal of Obstetrics and Gynecology found that women who had the shot two years in a row had a rate of loss of about 6%.

And if you decide to use the pill, plan ahead and supplement with the right nutrition, vitamins and minerals your body is going to need to stay balanced and healthy. In the next article, I will take a look at specific things you can add to your diet if you are using birth control and will discuss some alternatives to toxic methods that are not only just as effective, but can also give you valuable knowledge about your own body that can lead to true reproductive empowerment.