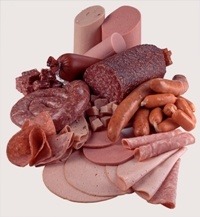 You’ve probably heard the news: A group of World Health Organization experts just announced that consumption of processed meat (such as bacon, sausage, deli meats and hot dogs) positively causes cancer. The group also concluded that red meat such as beef, pork, and lamb probably causes cancer, too.  Are you surprised?

This October, 22 expert scientists from ten countries met at the International Agency for Research on Cancer (IARC) in Lyon, France, to review all the evidence and evaluate the carcinogenicity of red meat and processed meat.  Their report, published in the Lancet medical journal, confirmed many previous studies on the links between meat and cancer.

Processed meat refers to meat that has been transformed by salting, curing, smoking, or the use of chemical preservatives to improve flavor or shelf life. The IARC report specifically named ham, hot dogs, sausages and jerky. Based on stomach and colorectal cancer evidence, the scientists classified processed meat as definitely “carcinogenic to humans.” In fact, “each 50 gram portion of processed meat eaten daily increases the risk of colorectal cancer by 18 percent,” the IARC stated.  And that risk increases with the amount of meat consumed.

“In view of the large number of people who consume processed meat, the global impact on cancer incidence is of public health importance,” the experts concluded.

The scientists classified consumption of red meat – beef, pork and lamb — as “probably carcinogenic to humans” because of its association with pancreatic and prostate cancer. That’s not startling news – the evidence has been building for years that eating meat, especially processed and red meat, raises the risk of cancer.

At BeatCancer.org, we have been recommending little or no red meat for 38 years. I often cite a British study of more than 6000 vegetarians which showed them 40% less likely to die of cancer than meat-eaters.  Moreover, studies of pre- and post-menopausal women have demonstrated that risk for ER+ breast cancer increases with consumption of red meat. Research on about 35,000 women over a period of seven years showed that eating red meat daily increased risk by 56% over those who ate none. Women who ate the most processed meat had a 64% greater risk.

We don’t believe that everyone has to be a total vegetarian, but you should certainly substitute plant-based protein sources like beans, seeds, nuts, and legumes for most of your animal-based proteins. Those that remain in your diet should be primarily cage-free hen eggs and wild fish. If you are looking for some healthful, simple and delicious plant-based main courses to take the place of meat, check out my recipe books Hungry for Health and Hungrier for Health. Your purchase will help support the cancer education services of BeatCancer.org.

The American Institute for Cancer Research (AICR), which studies the role of lifestyle and cancer, has also been recommending that Americans reduce the amount of beef, pork, lamb and other red meats in their diets and avoid processed meats like bacon, sausage and hot dogs. AICR estimates that consuming a healthful diet and engaging in regular physical activity could prevent 50% of colorectal cancer diagnoses and probably an estimated one-third of all cancers – nearly 350,000 cases annually!