The Cancer-Healing Power of Frankincense

The Cancer-Healing Power of Frankincense 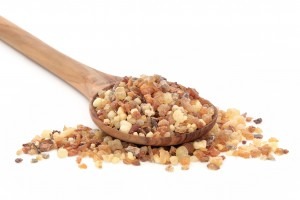 What our ancestors knew is what modern medicine is just now beginning to understand: Essential oils are literally the “blood” of a flower or herb. They are highly powerful, volatile aroma concentrates, each containing unique healing properties. Frankincense oil (boswellia serrata), made from the tree that grows in Africa and Arabia, is no exception — but it may have exceptional anti-cancer power.

There was a reason the Three Wise Men brought this special oil to Jesus as a young child. Since biblical times, frankincense has been known as an anti-inflammatory and immunity boosting agent as well as a digestive aid and potent infection fighter, among other things.

Recently, frankincense has been in the spotlight for another healing property: studies suggest that it is also a potent cancer-fighter.

Investigations over the last twenty years or so have confirmed frankincense’s anti-inflammatory and immune-boosting properties, two elements that are vital for healing cancer. In a study with mice published in the journal Phytotherapy Research in 2011, researchers administered 1-10 mg of frankincense orally, which stimulated the immune system by increasing white blood cell count, the body’s primary defense mechanism against infection and disease. This, in turn, lowered inflammation.

Other studies have discovered the healing properties of boswellia serrata when it comes to prostate, breast and colon cancer. Frankincense contains a cancer-killing substance called acetyl-11-keto-beta-boswellic acid (or AKBA, for short), which is found in the gum resin of the tree.

Researchers at England’s University of Leicester, with funding from the government of Oman, tested AKBA’s efficacy on ovarian cancer; this kind of cancer can be difficult to diagnose as well as to treat. Their findings, published in 2013, concluded that this ancient oil proved more effective than chemo at hunting out hiding tumor cells, even in the last stages of ovarian cancer.

“What has been most surprising is that the cells we have tested which are resistant to chemotherapy have shown to be more sensitive to this compound, suggesting frankincense may indeed be able to help overcome drug resistance, and lead to an improved survival rate for patients with late-stage ovarian cancer,” said Dr. Mark Evans of the University’s Department of Cancer Studies and Molecular Medicine.

A new study that came out of the Sapienza University of Rome last year (2015) focused on frankincense’s effect on women with mammographic breast density. The researchers concluded that when boswellic acid, betaine and myo-inositol were combined, breast tissue density decreased. But what does this mean for actual breast cancer risk?

In order to answer that question, a few words should be mentioned here about the condition itself. A woman is said to have “breast density” when there is more supportive tissue in her breast area than fatty tissue. Studies dating back a decade ago suggest a slight possible connection between high breast tissue density and hormonal imbalance. This connection, if it exists, could affect breast cancer risk.

In addition, breast density is considered to be a breast cancer risk by conventional medical standards mostly because the dense tissue makes it harder for mammography equipment to see through it in order to detect abnormalities. If you have breast density (and even if you do not), consider regular thermographic breast check-ups as well as learning about and following a healthy breast protocol that includes overall diet and lifestyle changes. There are also specific blood tests that can determine if you have cancer and where it is located, even if it is as small as the size of a pin head.

Frankincense is usually administered topically through a carrier oil such as saponified coconut or jojoba. It can also be consumed orally in water. Although there are no known side effects for taking it this way, it is best to work with a qualified practitioner if you are using frankincense for healing cancer.

New discoveries are being made every year about the applications of this powerful and ancient oil. One thing is for sure, however. It is more than just a pleasant-smelling perfume. Now there is strong evidence that it may have a powerful effect on cancer cells as well.

[1] Frankincense Effective in Killing Ovarian Cancer Cells http://www.universityherald.com/articles/6350/20131220/frankincense-christmas-gift-ovarian-cancer-cells-leicester-university-gum.htm
[2] Anti-inflammatory actions of boswellic acids http://www.sciencedirect.com/science/article/pii/S0944711396800171
[3] Dense Breast Tissue: What It Means to Have Dense Breasts
[4] http://www.mayoclinic.org/tests-procedures/mammogram/in-depth/dense-breast-tissue/art-20123968
[5] An association of boswellia, betaine and myo-inositol (Eumastós®) in the treatment of mammographic breastdensity: a randomized, double-blindstudy. http://www.ncbi.nlm.nih.gov/pubmed/26636532
[6] Breast Density and Cancer Risk: What Is the Relationship? https://academic.oup.com/jnci/article/92/6/443/2964989
[7] Breast density alone not a risk factor for cancer, study suggests https://www.sciencedaily.com/releases/2015/12/151202084226.htm