The DARK Act: Protect Your Right to Know

The DARK Act: Protect Your Right to Know 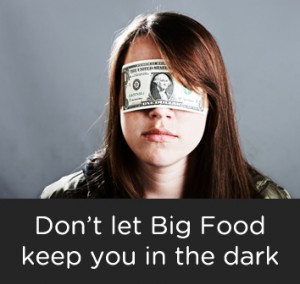 Many of you know of my concern about the known and unknown risks of Genetically Modified Organisms. Now you have a chance to take an urgent action step to protect your right to know even IF your food has been genetically engineered.

Back in April, the Center for Food Safety alerted us to a bill very dangerous to consumers. The Grocery Manufacturers Association, along with allies like Monsanto and Dow, teamed up with Koch-backed Congressman Mike Pompeo of Kansas to introduce a federal bill that would deny your right to know what is in your food. That bill is now on the move.

The bill, (HR 4432), christened by critics as the “Denying Americans the Right-to-Know Act” (DARK Act), has just gained 20 new Republican co-sponsors, bringing the total up to 25. That’s 25 members of Congress who stand with industry in an effort to keep consumers in the dark.

If passed, this bill would:

GE labeling is important to health-conscious Americans.  In 2013 and 2014, more than 70 GE labeling bills and ballot initiatives were introduced in 30 states, with laws being passed in Maine, Connecticut and Vermont. The DARK Act would shut down these efforts and replace them with an undemocratic, hollow “voluntary” labeling scheme that doesn’t work. In the 13 years that the FDA has allowed companies to voluntarily label GE foods, a total of zero companies have done so.  Big surprise!

Even though Americans overwhelmingly support GE labeling, and even though 64 countries across the world require GE labeling, the sponsors of this bill want Americans to remain uninformed.While countries like South Korea, Japan, China, Brazil, South Africa and the entire European Union care about their citizens’ right to know what is in their food, some in Congress are instead working on keeping Americans in the dark.

The right to know is the right to choose! Take action now! Tell Congress to OPPOSE the DARK Act and SUPPORT mandatory GE food labeling!

If you click on the link above and enter your contact information, the Center for Food Safety will submit your request for you to the proper legislators.