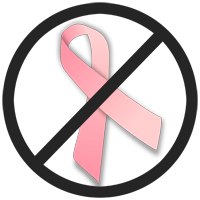 Please don’t misunderstand me, if you are honoring or memorializing a loved one, I respect you and encourage you to do so. What I’m asking is that you consider the politics behind the National Breast Cancer Awareness Month/

Please don’t misunderstand me, if you are honoring or memorializing a loved one, I respect you and encourage you to do so. What I’m asking is that you consider the politics behind the National Breast Cancer Awareness Month/Pink Ribbon campaign. Again, please allow me to state here, that in no way do I mean to discredit those cancer researchers, physicians and those organizations who are truly ‘fighting cancer’ on the battlefields of prevention, health education, and obvious cures. You are many in numbers and you are making a difference, and for that I thank you!

The “pink ribbon” idea came from Nancy Brinker who launched the Susan G. Komen Foundation in 1982 after her sister died of breast cancer. She promised her sister that she would “do everything in her power to end breast cancer forever”. Nancy said that ‘others’ saw it (pink ribbon) and borrowed it…and boy, have they! When asked about her recent controversial KFC “buckets for a cure” campaign regarding raising money by selling unhealthy food(don’t laugh, I’m serious!), Nancy replied, “Yes, but we like to reach entire sectors of the population who haven’t heard these messages.” What population and what messages!? Eat more grilled and/or fried chicken to prevent breast cancer? Really?! This will not end breast cancer forever as she promised her sister, this only promotes it (research below).

If only the Foundation would promote real prevention, good dietary and lifestyle habits and not just early detection and promoting unhealthy foods, Nancy might actually do more for millions of women and her sister’s memory than any other foundation. Awareness, education…the way to defeat cancer is to keep it from developing at all and teach others how! Just consider.

Nancy, I do applaud your efforts and praise you for memorializing your beloved sister. I have worked with several cancer organizations; I’ve produced, written and hosted a show for the ACS; I’ve even been a keynote speaker teaching about cancer prevention through nutrition. When I worked as a press and media relations chair for one cancer organization, it was common to not only attend meetings where ‘cancer-promoting foods’ where on the table, but were served at the fundraisers! But…

There is so much money to be made by big businesses and organizations ‘racing to find a cure’ at the expense of women everywhere, not to mention men and children! Supporting these companies may make some people feel that they are actually contributing to a cure, but when we support cancer-promoting food companies, we are actually ‘buying’ more cancer! Think about it…if you know that sugar feeds cancer, grilled meats cause cancer, animal protein and dairy promote cancer…why would you ever consume them to increase your risk? We need to be tying pink ribbons around bushels of fresh produce, those marvelous cancer-fighting phytochemicals that not only prevent cancer but may indeed cure cancer!

The Who, What, Why and Profits of Breast Cancer Awareness Month

Zeneca Pharmaceuticals, (now known as AstraZeneca) makers of the controversial chemotherapy drug Tamoxifen, and Zeneca’s parent company, Imperial Chemical Industries, launched Breast Cancer Awareness Month back in 1984. Their focus has been to ‘educate women about early detection of breast cancer’, with particular focus on another controversial x-ray test, mammograms. Their trademark slogan is “Early detection is your best prevention”, which is ludicrous, considering by the time a pea-sized lump is found, the cancer has been there for about 10 years. So ‘early detection’ is NOT prevention…it’s a business.

Actual and real prevention is teaching women how to avoid the cancer in the first place…ten years prior to ending up in a physician’s office with the diagnosis!

A more in depth look at Zeneca and Imperial Chemical Industries (ICI) has shown the following:

A side note here: The controversial drug, Tamoxifen is considered an anti-estrogen drug. It works by reducing the activity of estrogen which is known to be associated with elevated breast cancer risk. If we wish to practice disease prevention, shouldn’t we be asking why estrogen levels are so high, knowing that diet and nutrition origin play a role? Research shows us that animal protein, including dairy increase estrogen levels. Would it not be more prudent to shut off the estrogen source?

So, ask yourself…if we know that up to 95% of cancer, including that of the breast, is preventable by proper diet, nutrition, and lifestyles, why are you spending money and donating to a cause that does not promote prevention of this disease or educate you on proper nutrition? I can’t help but think of the BILLIONS of dollars donated and spent on these programs; the millions of dollars in marketing and ads, and pink buckets of chicken, pink NFL shoes, and hundreds of other pink items…for the race to find a cure and the race to teach women to get mammograms??? Sounds more like GREEN than PINK to me!

On an end note; the widely watched, celebrity fundraiser “Stand Up To Cancer” that aired on every major network…has raised millions and millions of dollars to find a cure; not ONE word in the one hour special about HOW to PREVENT cancer, not one word on prevention through DIET and NUTRITION…not one pink word! :~(