The Positive Science of Food in Cancer Prevention

The Positive Science of Food in Cancer Prevention 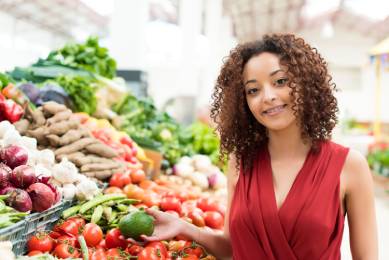 Cancer is a baffling condition, its diagnosis capable of turning anyone fearful or depressed — so let me tell you a story. About fifty years ago in China, Premier Chou EnLai, who was dying of terminal cancer, commissioned a survey of the nation’s cancer rates as his personal legacy. The Cancer Atlas published in 1970 mapped cancer rates for more than 96% of the population in China—880 million people. The result of this massive undertaking showed a high incidence of cancers in some counties that neighbored areas with a very low incidence. Considering that almost 90% of the population in China is of the same ethnicity, the findings suggested neither a genetic nor a random pattern and raised the question: Was it something in the environment?

Intrigued by these findings, two scientists at Cornell University (Prof. T Colin Campbell and Dr. Junshi Chen) designed a follow up study, also in China, where 6,500 people in 65 rural counties were surveyed, sampled, and analyzed, this time for all diseases. As one might expect, in poor areas there were malnutrition and diseases associated with poor sanitation, but among the diseases which clustered in affluent areas were diabetes, heart disease, and cancer. Why? To think that a comfortable lifestyle and a diet of meat,dairy, eggs, and confectioned foods could put one at such risk was — and still is — hard to accept.

According to the Cornell China Study in the 1980s, the subjects had lived in one place and consumed the diet typical for that region all their lives. Then came fast food, the great equalizer—and Eggs Benedict became Eggs McMuffin. Besides the democratization of our diet, many people today do not stay in one place anymore, blurring many other parameters, and in fact making the findings of this landmark study all the more significant.

Ignoring prior independent studies that also suggested an association between diet and disease, research followed the money, which instead poured in to study “carcinogens”— cancer-causing chemicals found to damage the DNA of individual cells. The reasoning went something like this: if we could avoid being exposed to carcinogens, our cells (and our diet) would be safe. In reality, we are exposed to over 100,000 environmental chemicals; testing, let alone eliminating all of them from our landscape, is impossible. Plus there are viruses, toxins, radiation, and many other dangers, too numerous to count. This carcinogen exposure hypothesis was abandoned almost twenty years ago, yet it remains entrenched in the public’s mindset, which demands testing and labeling to no end.

This much we know: Rich and poor, we are all exposed to agents that damage DNA—our cells cannot avoid an initial insult. However, only five percent of damaged cells escape repair by our immune system and pass the mutation to their progeny. It is a long way for this line of rogue cells to get promoted to tumor status. Abnormal cells are being pushed and pulled for years, promoted and anti-promoted for decades. Most importantly, cells in the cancer promotion stage and even at the progression stage have some degree of reversibility — which we can influence with our choice of food. In other words, central to this balance we call health is none other than our diet. Food is chemotherapy that we take three times a day.

To be clear, our bodies need the active biologicals present in whole plants. We need to consume integral plant food—for the prevention of cancer, as part of treatment, and certainly for maintenance. On top of that, eating a whole foods plant-based diet can also arrest and reverse other chronic conditions, such as diabetes and heart disease. It is important to understand this: science has yet to recreate the synergistic interactions that occur in foods (many yet unknown) in one pill. Myriad active substances in food (vitamins, phytochemicals, antioxidants, and anti-inflammatories), are like the many musicians in an orchestra, none of which can alone play the symphony. If we take for example an apple, there are thousands of known chemicals that act together with vitamin C to produce the benefits we ascribe to the whole fruit.

Adopting a whole foods plant-based diet makes it easy to reach a healthy weight, in itself protective, and gives us energy to stay active. Do not be tempted to just moderate your present diet. Find the help you need to make radical changes.

I will end the story on this note—If you met a young Premier Chou EnLai today, how would you convince him to eliminate the cancer promoters in his diet (meats, dairy, eggs, and processed foods) and arm himself with anti-promoters (leafy greens and vegetables, whole grains, legumes, plus fruits, nuts, and seeds) every single day?

Perhaps by offering him two important books to read: The China Study by T.Colin Campbell took off where the Cancer Atlas left us and has been the source of many more questions and answers on diet and disease. I also recommend Dr. Campbell’s follow-up book Whole—essential reading for understanding the value of eating whole foods rather than fragmented nutrition.

Ana M. Negrón, MD is a board certified whole foods plant-based family physician with a consultation practice in Chester County, PA. Author of Nourishing the Body and Recovering Health (Sunstone Press), she volunteers at The Clinic in Phoenixville providing care to people without health insurance; teaches Crozer family medicine residents the role of food in medicine; and has been cooking with patients for over a decade. She offers appointments in Haverford and Paoli, PA, and can be reached through her website at www.greensonabudget.org .