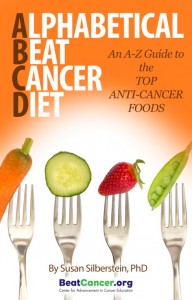 Do you know which vegetable can kill tongue cancer cells in a matter of days?

What berry can interfere with the growth of ovarian and liver cancer cells?

Which plant can kill up to 72 percent of human breast cancer cells on contact?

Which common nut contains the active ingredient in the chemotherapy drug Taxol?

Can you name seven foods that help prevent pancreatic cancer?

Can you identify the plant food that prevents the spread of glioblastoma cells?

What oil can suppress the HER-2 breast cancer oncogene by 71 percent?

Which vegetable inhibited the growth of melanoma cells by 75 percent in just 48 hours?

Do you know the vegetable that inhibits 90 percent of colon cancer cell growth?

Extracts of which vegetable can eliminate skin cancer in weeks?

Which plant food not only killed lung cancer cells but was also more effective against breast cancer cells than Tamoxifen?

Discover these and other amazing factoids about plant foods and cancer, information that can help you prevent or reverse dozens of types of cancer!  I am really excited to share with you news of my forthcoming book, and you can pre-order it now! The Alphabetical Beat Cancer Diet Book, an A-Z Guide to the Top Anti-Cancer Foods, is the perfect sequel to my earlier book Kitchen Chemotherapy  and offers a convincing “why” for dietary change. This new, fascinating, simple, reader-friendly alphabetical guide lists the key anti-cancer properties of over 100 specific plant foods.  It also summarizes some of the latest scientific research explaining their role for
cancer prevention, prevention of recurrence, and support during, after, or instead of treatment.

This easy-reading and empowering manual features:

I do want to point out that no food mentioned in my ABCD guide should be construed as a cancer cure. True, numerous foods that help to prevent cancer are also often effective in preventing recurrence or in slowing the progression of active cancer.  However, many compounds that can kill cancer cells growing in a Petri dish in the laboratory, as well as many phytochemicals that seem promising in animal models, can be disappointingly ineffective with an actual cancer patient, especially if he or she is undergoing conventional treatment.

But that is not an excuse to avoid the healthful foods I describe in this book.  Eating whole foods with all of their phytonutrients working harmoniously together in the body, and eating a large variety of the cancer-protective foods I cover, can produce synergistic and positive biological effects that medicine and science cannot fully comprehend.

As I often point out, our ultimate goal at BeatCancer.org is not to shrink or eliminate tumors, although we hope that will happen. Oncologic treatment often does that temporarily without solving the overall problem.  Ultimately, what we are trying to accomplish is to change the biological terrain, to repair and rebalance body chemistry, to enhance immune response, and to give the body the tools it needs to defend itself from within against cancer.

This is not my idea.  Doctors and scientists agree.  Here are two of my favorite quotations:

“Every day, at every meal, we can choose food that will defend our bodies against the invasion of cancer.” David Servan-Schreiber, MD, PhD, AntiCancer (2009)

So I hope you are as excited about my new book as I am, and I hope you will pre-order several copies now – they
make beautiful and wonderful holiday gifts. They also support the life-changing work of BeatCancer.org.