This Health Food Can Poison You with Arsenic!

This Health Food Can Poison You with Arsenic! 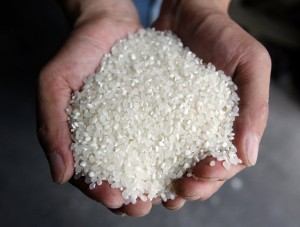 Growing awareness of gluten sensitivity from wheat-based foods and milk allergy from cow dairy foods has led many people to switch to rice-based products, but brown rice and rice milk may not be the health foods you thought they were. They contain arsenic! Chronic exposure to arsenic, even at very low levels, can affect health and even cause cancer.

Consumers have lately become alarmed over reports of rice-borne arsenic in everything from cereal bars to baby food. Some food manufacturers have stepped up screening for arsenic in their products, and agencies such as the Food and Drug Administration (FDA) are now making a major effort to clarify the safety of consumption of rice and rice products in the U.S.

What does the research show?

In tests for arsenic in more than 1,300 samples evaluated between 2012 and 2013, the FDA found average levels of 0.1 to 7.2 micrograms of inorganic arsenic per serving. The findings showed the highest average levels in brown rice, with 160 parts per billion (ppb) of inorganic arsenic per serving; infant rice cereal had 120. Consumer Reports found more than 95 ppb of arsenic in every brand of infant rice cereals it tested, nearly 10 times the legal limit for drinking water, set by the Environmental Protection Agency at 10 ppb. In tests of two common brands of rice milk, all samples exceeded those EPA limits, with samples ranging from 17 to 70 parts per billion. Britain’s Food Safety Authority cautions parents to avoid rice milk as a dairy alternative for toddlers under age five.

Arsenic is a chemical element present in the environment from both natural and human sources, including erosion of arsenic-containing rocks, volcanic eruptions, contamination from mining and smelting ores, and previous or current use of arsenic-containing pesticides. There are two general types of arsenic compounds in water, food, air and soil: organic and inorganic. The latter have been more closely associated with long-term health effects, and scientific evidence suggests that those risks can be significant.

In 2001, the National Academy of Sciences estimated that people drinking arsenic-contaminated water at 10 ppb would have a 1-in-300 risk of developing cancer over their lifetimes. Recent research suggests that people ingest about that much arsenic in a just a half-cup serving of rice, not an unusual amount for millions of Americans. Researchers in the United Kingdom and India published a groundbreaking study showing that frequently eating rice with high amounts of arsenic can lead to genetic damage in cells. Long-term exposure to high arsenic levels is associated with increased rates of skin, bladder and lung cancers. Although inorganic arsenic is a known carcinogen, there are no set federal limits for it.

Which rice is the most dangerous?

Rice absorbs arsenic (as well as cadmium and mercury) from soil and water more readily than other crops because it is grown in flooded fields known as paddies, where arsenic in soil is released to be taken up by the plant’s roots. However, the type and source of the rice do make a big difference. Surprisingly, the highest levels often occur in brown rice. This is because arsenic accumulates in the bran and hull, which are polished off in the processing of white rice. Consumer Reports has stated that arsenic concentrations found in the bran that is removed in milling can be 10 to 20 times higher than levels found in bulk white rice. Among types of white rice, the parboiled version tends to have the highest levels of inorganic arsenic, with an average of 114 ppb. Black and red rice tend to be lower in arsenic and higher in nutrients.

The amount of arsenic in rice also varies by location. More than 10 percent of the rice in China, Pakistan, and Bangladesh (where the underlying arsenic-rich bedrock contaminates groundwater used for irrigation of rice fields) is estimated to have arsenic concentrations exceeding 200 ppb. However, more than 50 percent of the rice produced in the U.S. is estimated to contain arsenic at those elevated levels. Countries producing rice with much lower arsenic levels than the U.S. include Nepal and India, and rice from Egypt was found to have the lowest arsenic levels of those tested. Imported aromatic varieties like Indian basmati or Thai jasmine rice tend to have lower levels of inorganic arsenic (one-half to one-eighth the levels in regular rice grown in the southern U.S.) California rice, especially medium grain, tested at 41% lower arsenic levels than rice from southern states like Texas, Arkansas and Louisiana, where the source of arsenic may be from former cotton fields sprayed with arsenic-containing pesticides and later converted to rice fields.

What should you do?

Limit your servings of rice and rice products to no more than one per day at a maximum. Be mindful of how many products contain rice, such as rice cereals, rice cakes and gluten-free pasta and bread products.

Alternate rice with other grains. Good substitutions are oats, quinoa, millet, barley, and buckwheat. You can also go grain-free for some meals with wild rice (not actually rice but a grass seed), almond flour and coconut flour.

Limit rice for young children. Instead of daily rice cereal as the first solid food for babies, try sweet potatoes, squash, bananas, and avocados. Children under age five should not have rice milk as part of their daily diet.

Breastfeed your baby instead of offering infant formula. Even organic infant formulas often contain brown rice syrup as a sweetener.

Rinse rice thoroughly before cooking and boil rice with extra water. Pouring off excess water after cooking reduces about 30% of the arsenic in the rice. Aim for six cups of water per cup of dry rice.

If possible, check your rice source, and purchase rice grown in California or other countries as mentioned above. Avoid rice grown in the south central United States.

Eat white rice as well as brown. While brown rice is generally healthier than white rice, more of the arsenic is stored in its outer hull.

Check ingredients for rice syrup and buy products that don’t list it near the top of ingredients. Brown rice syrup is a common sweetener in organic and natural foods.

Take arsenicum homeopathic as an antidote. Check with a homeopath for dosage recommendations.

Ask your legislators to sponsor legislation for federal limits of arsenic in foods.