Top Hormone-Balancers: The Power of These Three Common Veggies May Surprise You!

Top Hormone-Balancers: The Power of These Three Common Veggies May Surprise You! 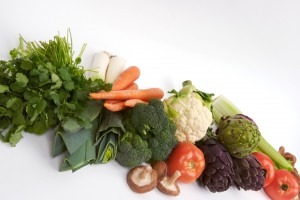 Most women on the breast cancer journey know the importance of balancing their hormones for overall breast health. Many (maybe even you) have been diagnosed with ER-positive breast cancer, meaning that their breast cancer is caused by an overproduction and malabsorption of the wrong kinds of estrogen in the body.

First of all, I would like to make it clear that naturally-produced estrogen does not cause cancer. Just the right amount of estrogen is vital and needed for hundreds of functions in the body, including normal operation of the reproductive and endocrine system. In the modern world, however, the widespread use of chemicals─ including preservatives in food, toxins found in beauty products and a plethora of environmental contaminants found in everything from plastic containers to city tap water─ have created super-aggressive “Xeno-estrogens” that are difficult for your body to assimilate. The malabsorption of these foreign estrogens can cause a host of health issues, including breast cancer.

There are many natural ways to maintain proper hormone balance. Right supplementation, exercise and practicing a toxin-free lifestyle top the list. Did you know, however, that you can also achieve healthy hormones through the simple act of eating the right kinds of foods?

The detoxifying and hormone-balancing power of these three commonly-found veggies may surprise you!

You may have gotten in the habit of overlooking the lowly celery stalk, but did you know that celery is literally a powerhouse of cancer-preventing and cancer-stopping substances and that the stalk as well as the seeds have been used in Ayurvedic and other natural healing traditions for thousands of years?  Celery contains flavones, which are phytoestrogens that bind to estrogen receptors (preventing foreign estrogens from doing so). The flavonoid apigenin, found in celery, has proven especially potent for this purpose. In fact, a 2008 study published in the journal “Molecular Cancer Therapy” reported that breast cancer cells stopped growing when exposed to apigenin. Furthermore, a 2012 study found that this flavonoid could be a non-toxic treatment for HER2 Breast Cancer. Celery also contains coumarins, which decrease mutations in certain cells as well as acetylenic substances that have been known to stop the growth of cancer cells.

Broccoli is a “cruciferous vegetable,” as is arugula, kale, bok choy, radishes, Brussel sprouts, turnips, cabbage and cauliflower, just to name a few.Vegetables in this category have often been called “Mother Nature’s detoxifiers” since they optimize Phase II detoxification in the liver. This aids your body in flushing out foreign chemicals, including cancer-causing Xeno-estrogens. A study of over 4,000 Chinese women conducted by the Vanderbilt-Ingram Cancer Center and the Shanghai Center for Disease Control found that women who had survived Stage 1 to 4 breast cancer and ate the most cruciferous vegetables had reduced their breast cancer mortality rate by 62%. Cruciferous veggies like broccoli also contain Isothiocyanates and Indoles, phytochemicals that have the ability to alter estrogen metabolism and lead to breast cancer cell death.

Carrots: Not Just For Rabbits Anymore

Carrots, along with most other red or orange vegetables and fruits, are great sources of beta-carotene, which is a precursor to the production of vitamin A in the body. Beta-carotene and other carotenoid compounds are also effective in reducing the growth of estrogen receptor positive and negative breast cancer cells. According to a study published in the journal Epidemiology, high levels of beta-carotene are associated with a reduction in the risk of breast cancer.

Eating at least one raw carrot every day helps to detoxify excess estrogen. Be sure that you are eating regular-sized carrots with the peel intact until the time that you eat it, however, since the peel prevents the growth of certain kinds of harmful bacteria, according to some.

It is not difficult to be healthy and reduce the risk of breast cancer. In fact, it could be as easy as making a green drink, smoothie or raw salad with these three common yet potent ingredients every day. Also, be sure to get your hormone levels tested before you begin any hormone-regulating program. By following  “The 7 Essential System™ ”  for healing the body naturally, which includes healthy nutrition and preventative, safe testing, you may never have to fear cancer again!