Vitamin C and Cancer – Part One

Vitamin C and Cancer – Part One 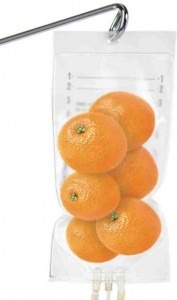 Research has shown that high concentrations of vitamin C can stop the growth of, or even kill, a wide range of cancer cells. Because the molecular shape of vitamin C is remarkably similar to that of cancer’s favorite food, glucose, vitamin C readily accumulates in cancer cells. However, there is a big difference between oral vitamin C and intravenous vitamin C.

Levels of vitamin C achievable through oral intake are much lower than what can be achieved by IV administration. While oral vitamin C boosts immunity and assists tissue repair, it is too weak to do much to kill or inhibit cancer cells. But vitamin C given intravenously (IVC) is another story because much higher concentrations of C can be attained.

According to Harvard-trained integrative oncologist Brian Lawenda, MD,[1] 1000 mg (one gram) of oral vitamin C daily will achieve about 95% of blood levels possible to reach by oral intake. It is difficult for oral doses higher than that to raise levels any higher.[2] Only intravenous administration of vitamin C can deliver the high doses found to be effective against cancer. In one study, urine concentrations of vitamin C from IV administration were 140-times higher than those from maximum oral doses.[3]

As an antioxidant vitamin C aids in maintaining the activity of the glutathione molecule and the peroxidase enzymes, thereby enhancing detoxification of various drugs and chemicals.  Interestingly, at the high blood levels achieved by IV administration, studies [4] show that vitamin C does not act like an antioxidant but like a pro-oxidant (through the production of hydrogen peroxide, or H202) — meaning it can cause DNA damage (just like radiation therapy and chemotherapy), but it selectively does this just in tumor cells.

At high doses delivered directly into the bloodstream, vitamin C can increase levels of hydrogen peroxide deep in the tissues where cancer cells lurk. Peroxide-mediated killing is one of the white blood cells’ key mechanisms for fighting cancer. Hydrogen peroxide preferentially kills cancer cells with no toxic effect on normal cells because cancer cells do not have the enzyme catalase to break down the H2O2 into water and oxygen. Vitamin C can also curb the growth of cancer cells by tricking them into thinking it’s sugar, so the cancer sucks it up and is killed from the inside out by the resulting H2O2.

Intravenous vitamin C also boosts immunity, stimulates collagen formation to help the body wall off the tumor, inhibits hyaluronidase, an enzyme that tumors use to metastasize and invade other organs throughout the body, and induces apoptosis (programmed cancer cell suicide).

History of Vitamin C for Cancer

In the 1970s, Nobel laureate Linus Pauling, PhD, and Scottish cancer surgeon Ewan Cameron, MD, demonstrated the effectiveness of intravenous vitamin C in reversing cancer in 50 terminal patients. Based on these cases, Cameron and Pauling reported that IVC (10 grams/day for 10 days, followed by 10 g per day orally, indefinitely) demonstrated improved survival times and quality of life. In fact, they found that vitamin C helped cancer patients live about four times longer than cancer patients not given vitamin C. The team ultimately administered high-dose vitamin C in the form of sodium ascorbate both orally and intravenously to treat more than 1,000 cancer patients.

Two decades later, Dr. Hugh Riordan of Kansas treated hundreds of cancer patients with doses of vitamin C up to 200,000 mg (200 grams) per day in infusions lasting 4-12 hours several times a week. He compiled a series of case histories documenting impressive responses. Dr. Riordan and his research team generated 20 published papers on vitamin C and cancer and proved that intravenous vitamin C at markedly high doses is selectively toxic to cancer cells without sacrificing the performance of chemotherapy.

In a forthcoming article, I will share some exciting new research on IV vitamin C. Stay tuned.