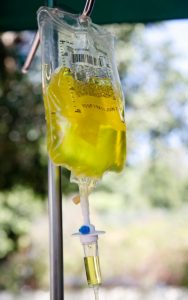 In my previous article on vitamin C and cancer, I explained the difference between oral and intravenous vitamin C (IVC), discussed how vitamin C works against cancer, and reviewed some of the earlier research on IVC and its effects on cancer outcome. Recently, scientific researchers have been revisiting the promising role of IVC as a cancer therapy, and I want to share with you some of their exciting findings.

According to new laboratory research involving human cells, mice, and cancer patients, large doses of intravenous vitamin C have the potential to boost the effectiveness of chemotherapy and improve quality of life. When cancer patients receive intravenous vitamin C, they report that their pain level goes down, they are better able to tolerate their treatment, and they bounce back more quickly.

Recently, researchers at the National Institutes of Health (NIH) have revisited the potential of vitamin C as an anti-cancer agent, and there has been renewed interest in this modality for fighting cancer based on new, exciting research. Spearheaded by Mark Levine, MD, chief of the U.S. National Institutes of Health’s Molecular and Clinical Nutritional Section, scientists tested intravenous injections of high-dose ascorbic acid in mouse models of ovarian cancer, pancreatic cancer, and glioblastoma. In the August 12, 2008 issue of the Proceedings of the National Academy of Sciences, Dr. Levine, lead researcher and co-author of the study, reported that in all three tumor types, intravenous vitamin C reduced cancer growth in mice by 43 to 51% as compared with untreated mice. In addition, metastases were found in about 30 percent of untreated mice, but in none of the mice injected with ascorbic acid.

Studies in Japan published in 2009 reported the anti-cancer effects of vitamin C on cancer patients with numerous types of advanced cancer. This work has since been confirmed in a phase I clinical trial led by L. John Hoffer, MD, PhD.

In a 2011 German study, scientists compared breast cancer outcome in patients receiving IVC and standard therapy together, versus standard therapy alone. In the study of 125 patients with stage II-III breast cancer, investigators gave 53 of these patients IV vitamin C (7.5 grams) along with their usual treatments of chemotherapy and/or radiation therapy. The remainder of the patients received only the cancer treatments. Those receiving IV vitamin C experienced a significant reduction (nearly 50%) in unpleasant symptoms and side effects of chemotherapy and radiation therapy such as loss of appetite, fatigue, depression, sleep disorders, dizziness, and bleeding problems. The overall intensity of these symptoms during treatment was nearly twice as high in the control group compared with the IV vitamin C group.

A University of Kansas Medical Center study published in 2014 in the journal Science Translational Medicine demonstrated that IV vitamin C increased the effectiveness of chemotherapy against cancer in mice.  An accompanying human study, led by Jeanne Drisko, MD, Director of Integrative Medicine, and published in the same journal found that ovarian cancer patients who received IVC during their chemotherapy had fewer toxic side effects (more energy and less nausea) than those who did not receive IVC.  In the clinical trial involving 27 patients with newly diagnosed stage III and IV ovarian cancer, all of the participants received conventional therapy with paclitaxel or carboplatin, while some were also treated with high-dose intravenous vitamin C. Researchers monitored the participants for five years. According to Qi Chen, PhD, senior author, those patients who received intravenous vitamin C along with their chemotherapy reported less toxicity of the brain, bone marrow and major organs.  IVC also extended by nine months the time before their disease relapsed and progressed, as compared with patients who only received chemotherapy.

In fact, the researchers stated, “IV vitamin C, given together with chemotherapy, works better than either alone ….”In cell tissue and animal models of cancer, we saw when you add IV vitamin C it seems to augment the killing effect of chemotherapy drugs on cancer cells ,” while leaving normal cells unharmed.

Because of its positive effect on cancer symptoms, treatment side effects, enhanced quality of life, and disease outcome, intravenous vitamin C may be considered a valuable integrative medical therapy for cancer.  Administered via IV in very high doses (25,000 mg and up), vitamin C behaves like a non-toxic chemotherapeutic agent and can even be given in conjunction with conventional cancer treatments.

IV vitamin C, when administered by a trained, experienced physician, is safe and generally well-tolerated, even at doses as high as 100,000 mg (100 grams) per day. It should be noted, however, that doses should be gradually adjusted upward, patients must be carefully monitored, and not all patients may be candidates for IVC.

Let us hope that, despite the decades-long history of discredited health claims, as well as the inability of pharmaceutical companies to patent and therefore benefit financially from an essential nutrient, intravenous vitamin C will attract the research funding it deserves.

[14] Lawenda B. Is there a role for vitamin C in cancer care? February 5, 2014. Integrative Oncology. http://www.integrativeoncology-essentials.com/2014/02/is-there-a-role-for-vitamin-c-in-cancer-care/