What Are Your Chances of Getting Cancer?

What Are Your Chances of Getting Cancer? 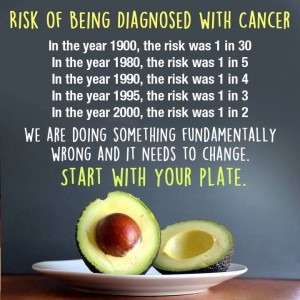 A few days ago a supporter wrote, “My teammate shared this image on Facebook and got slammed by someone calling it ‘misinformed,’’misleading’ and ‘junk science.’ I have no idea where I could find the truth, and I thought perhaps you could point me in the right direction.” As my late friend Dr. David Kritchevsky, former Associate Director of Wistar Institute, quipped, “If you torture the statistics long enough they’ll confess.”  So should we trust those statistics?

I have not found a source for lifetime cancer risk in 1900, but the later data seem to have originated from the website of Cancer Research of the United Kingdom (cancerresearchuk.org), which states: “In 1975 the lifetime risk of being diagnosed with cancer in the UK was one in four people; by the 1990s it had risen to one in three, and by 2010 it was four in 10.” That means that the risk of getting cancer is now close to one in two.

Similar data come from the SEER Cancer Statistics Review released April 23, 2015.  The Review, a report of the most recent cancer incidence, mortality, survival, prevalence, and lifetime risk statistics, is published annually by the National Cancer Institute (NCI). The latest edition includes statistics from 1975 through 2012, the most recent year for which data are available. For all sites, the lifetime risk was again declared to be four in 10.

That figure is corroborated by the American Cancer Society website, which states that the risk of developing cancer for all invasive cancer sites is one in two for males and one in three for females.  Indeed, the odds of avoiding a cancer diagnosis do not seem very good. But read on.

On the Mayo Clinic site, in an article entitled “Cancer Risk: What the Numbers Mean,” the writer explains:

“Risk statistics can be frustrating because they can’t tell you your risk of cancer. Studies may have found that men have a nearly 45 percent chance of developing cancer in their lifetimes, but that doesn’t mean your risk is 45 percent. Your individual risk is based on many different factors, such as age and habits (including eating habits), family history of cancer, and the environment in which you live.”

The World Health Organization (WHO), through its International Agency for Research on Cancer, classifies cancer causing agents in three main groups:

Aging is another important factor in the development of cancer. That the incidence of cancer rises dramatically with age is most likely due to an accumulation of risk factors combined with the tendency for cellular repair mechanisms to be less effective as a person grows older.  Nonetheless, although we cannot change the fact that we age, we can age healthfully.

What Can We Do About Cancer Risk?

The good news is that according to the WHO’s World Cancer Report, one-third of cancer deaths could be prevented by modifying or avoiding key risk factors, including lifestyle factors.  And in a 2008 review published in Pharmaceutical Research, scientists at MD Anderson Cancer Center present even stronger evidence for prevention:

“The evidence indicates that of all cancer-related deaths…25-30% are due to tobacco, …30-35% are linked to diet, about 15-20% are due to infections, and the remaining percentage are due to other factors like radiation, stress, physical activity, environmental pollutants, etc.” Declaring that inflammation is the link between the factors that cause cancer and those that prevent it, the authors provide strong evidence that “cancer is a preventable disease that requires major lifestyle changes.”

Biochemist Dr. T. Colin Campbell of Cornell goes even further: His empowering research proved to him that “diet trumps carcinogens every single time.” The 2007 joint report of the American Institute for Cancer Research and the World Cancer Research Fund included a review of over 7000 scientific studies by a panel of 21 world-renowned experts.  Their conclusion: diets that are protective of cancer are mainly made up from foods of plant origin.  A diet high in fruits and vegetables has been associated with a decreased risk of at least 15 different types of cancer.

According to CancerResearchUK.org, an estimated 14.1 million new cases of cancer occurred worldwide in 2012, and the World Cancer Report predicts that global cancer rates could increase to 15 million by 2020. What’s important is not the growth of cancer worldwide or even the statistic of your having a one in two lifetime risk of getting cancer.  What’s important is what you can do about it through wise lifestyle choices, and whether you are willing to seize that challenge.