Editors’ Note: Here is the final transcription of Dr. David Brownstein’s free webinar with Newsmax Health on How to Prevent Cancer.  Brownstein’s most important points are exactly what we have been saying for years! And as we stated before, although he discusses primarily cancer prevention, this information is equally valuable for preventing recurrence and for activating immune response in patients currently fighting cancer.

In my previous article, I discussed steps 1 – 4. Here are the final 3 steps:

#5. Avoid and Remove Toxic Metals From Your Body

In addition to testing my patients for iodine, vitamin and mineral deficiencies, and imbalanced hormones, I also test for heavy metals, which include:

All of these heavy metals will suppress your immune system, and a compromised immune system cannot protect you from cancer.

Over 20 years, I have tested tens of thousands of my patients for these heavy metals and have found that fully 70% have toxic levels — with mercury, one of the most poisonous substances known to man, being the biggest problem.

Most of my patients don’t have a clue where they picked up these harmful metals, but I can tell you they are in dental materials as well as the air, water, medicines, and food sprayed with pesticides and chemical fertilizers.

Do you have high levels of these toxic metals in your body that are, right now, suppressing your immune system and putting you at risk for cancer? You’d better find out, before you’re shocked with a cancer diagnosis!

Mercury, the worst of all, is prevalent in:

It’s also used in vaccinations, as well as in silver amalgam dental fillings.

If you eat these types of fish, get annual vaccinations, or have had silver amalgam dental fillings at any time during your life, you are almost certain to have elevated levels of mercury in your system.

Unfortunately, conventional doctors will not test you for heavy metals. And once these metals are in your body, they can only be removed by chelation therapy or chelating nutritional supplements.

In my own practice, I have seen dramatic health improvements in patients who have had these heavy metals removed. Not only do my patients get sick far less often, but they have a lot more energy and feel years younger.

These include traditional X-rays, dental X-rays, and mammograms. But the worst of the bunch are the PET (positron emission technology) scan, and the CT (computerized tomography) scan. 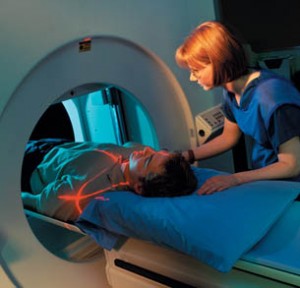 PET and CT scans expose the body to much larger amounts of radiation. CT scans, in particular, produce 50 to 100 times the radiation of a traditional chest X-ray.

There has been a dramatic increase in the number of CT scans ordered in the last decade — over 60 million of them — and the New England Journal of Medicine says at least one-third are unnecessary. I suspect two-thirds are unnecessary.

Remember, the radiation from these tests is cumulative. The damage builds up over time.

A recent study on mammograms concluded that 3,243 women, ages 40 to 59, would have to be tested annually for 10 years, just to save two lives.

Yes, just two lives, for 10 years of testing on thousands of women while adding cancer risk.

That’s because ten years’ worth of annual mammograms produces a cumulative effect of 10 rads of absorbed radiation, or about the same amount Japanese women received just one mile from the atomic bomb sites during WWII. That correlates to a 10% increased risk of breast cancer!

#7. Test for Vitamin and Mineral Deficiencies

By now, you know I test all of my patients for several things that conventional doctors do not test for, and there’s a reason for that. Conventional medical doctors are taught to diagnose pathologies and to prescribe specific drugs to treat those ailments.

There is no emphasis on prevention or wellness, and no attempt at cures.  It’s all about administering drugs for treatment of illness and disease, and that’s because that’s where the profits are.

But in recent times, some doctors have seen the failures of conventional drug-based medicine and have decided to take an entirely different approach. These are the holistic doctors who put the emphasis on prevention and wellness, as well as on natural therapies to restore good health.

This idea is not revolutionary but simple common sense: Avoid those things that are known to cause harm, and give your body what it needs for optimal health.

You already know about iodine deficiency and how it may lead to cancer. But take the second item, vitamin B12, for example.

Because of the typical American diet that creates heartburn and acid reflux, there is a huge business in antacids, including both over-the-counter antacids and prescription drugs.  But these antacid drugs inhibit the absorption of vitamin B12, which is essential to digestion, energy production, mental function, and the proper functioning of your immune system, making you more vulnerable to cancer.

You should know that conventional doctors do not study nutrition in medical school and therefore don’t have a clue what the optimal levels of vitamin and minerals should be.  And then, the government’s RDA for some of the most important nutrients is set 5, 10, 20, and even 100 times too low.

You simply cannot achieve good health, stay healthy, and avoid disease, if you have nutrient deficiencies. For these reasons, you’ll need to find a holistic doctor to run the tests we’ve been discussing today.

Dr. David Brownstein is a board-certified family physician, the Medical Director of the Center for Holistic Medicine in West Bloomfield, MI, and one of the nation’s foremost practitioners of holistic medicine. A graduate of the University of Michigan and Wayne State University School of Medicine, Dr. Brownstein is a member of the American Academy of Family Physicians and has been honored by the American College for Advancement in Medicine and the American Academy of Integrative Medicine. Dr. Brownstein Is the author of 11 best-selling books and the editor of a monthly health advisory Natural Ways to Health, available by subscription.