Do Cancer Death Rates Depend on Where You Live?

Do Cancer Death Rates Depend on Where You Live? 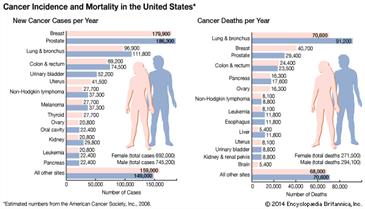 Americans in certain parts of the United States are dying from cancer at alarming rates, according to a major new analysis from the University of Washington’s Institute for Health Metrics and Evaluation. Could where you live — as a January 24 Associated Press article suggested — determine your fate?

Research estimating cancer death rates by county was published this week in the Journal of the American Medical Association (JAMA). Stark differences in regional cancer death rates have been found in previous research, but this study stands out for providing detailed estimates for deaths from nearly 30 types of cancer in all 3,100 U.S. counties over 35 years.

In poor communities with high rates of obesity and smoking, cancer death rates rose nearly 50 percent, whereas death rates fell by nearly the same amount in wealthier areas of the country. For us at BeatCancer.org who talk constantly about risk factors like diet, obesity and smoking and the fact that 90% of all cancers can be eliminated through environment and lifestyle choices, these findings are hardly surprising.

The worst figures came from eastern Kentucky, where cancer deaths per 100,000 residents increased by up to 45 percent. In counties with the highest 2014 cancer death rates, six of the top 10 were in eastern Kentucky, whereas six of the 10 lowest rates were in the Colorado Rockies. Particularly in terms of lung cancer deaths, four of the five counties with the highest 2014 death rates were in eastern Kentucky (as contrasted with wealthier parts of the state), with rates up to 80 percent higher than in 1980. In fact, nationwide, the biggest increases in deaths from tracheal, bronchial, and lung cancers were in the South, the Midwest, and the Appalachian region, especially Owsley County, Kentucky, where they went up almost 100 percent.

So why are lung cancer incidence and death rates in the Appalachian region of Kentucky the highest in the nation? One reason is tobacco use. Nearly 26 percent of Kentuckians smoke, compared with 21 percent of people nationally. A recent multistate study suggests, however, that high rates of lung cancer mortality in areas of Central Appalachia cannot be explained by tobacco use alone. Lung cancer death rates still vary widely across the 120 counties in Kentucky, and smoking on its own does not explain the discrepancy between southeastern Kentucky and the rest of the state or the rest of the country. So what else is going on?

Counties in the southeastern portion of Kentucky are part of Central Appalachia (which also includes West Virginia and adjacent parts of Tennessee and Virginia), a region noted for high poverty and low educational attainment. In addition to smoking, factors like obesity, low income and poor access to health care can explain many of the disparities — but again not all.

One more important factor that these areas have in common is coal mining. Environmental carcinogens from exposures related to the coal processing industry appear to be adding a major additional risk in the region. In coal-mining areas, prolonged exposure to toxic trace elements and heavy metals like arsenic, lead, cadmium, and nickel has been linked to several types of cancer — including lung cancer. These trace elements are known to promote carcinogenesis by increasing oxidative stress, inflammation and DNA damage, and reduced DNA repair efficiency.

Some people have reacted to the JAMA study with concern that access to services like no-cost cancer screenings previously provided by the health care law may be curtailed, as the Trump administration is expected to repeal the Affordable Care Act. However, while the JAMA study underscores the fact that not all Americans benefit equally from cancer screening, that may not really be the issue. Access to tests that may catch cancers early is certainly one way to reduce cancer death rates, but early diagnosis is not the same as true prevention. What about access to other aspects of prevention? Less important than where you live may be how you live. And that’s about diet and lifestyle education. As T. Colin Campbell has stated, “diet trumps carcinogens every single time” (pun unintended).