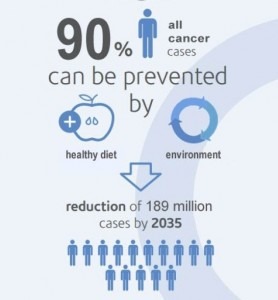 A client recently asked if I thought it was a good idea to follow her gynecologist’s recommendation to get genetic testing. The physician’s concern was that a positive BRCA1 result predicts a 60% – 80% lifetime risk of breast cancer, and a positive BRCA2 result gives a woman a 50% – 70% risk of breast cancer. Of course, I cannot offer a medical opinion, but here is what I said.

I replied that the purpose of the tests is to allow women to be proactive about their health, but that having mutated genes is not really the main issue. You can have breast cancer without the gene mutation and you can have a damaged gene without breast cancer. There have to be a number of genetic mutations within a cell before it becomes cancerous. Most women with breast cancer do not have a mutated BRCA1 or BRCA2 gene. In fact, less than 5% of all breast cancer is due to these genes. Some women who inherit a harmful BRCA1 or BRCA2 mutation will never develop breast cancer.

If you test positive, like Angelina Jolie, you may choose prophylactic mastectomy — which certainly reduces your risk but does not eliminate it entirely.  Other women know that certain lifestyle choices can keep genes from expressing themselves.  As Dr. T. Colin Campbell stated, “no matter if both your grandmothers died of breast cancer, you can avoid playing out that genetic tendency” (The China Project). Those women know they have to work hard to be part of the 20-40% that DON’T get breast cancer, and they are willing to do the work.

Cancer is a Preventable Disease

About seven years ago, a very important article, Cancer is a Preventable Disease that Requires Major Lifestyle Changes, was published by scientists at The University of Texas, M.D. Anderson Cancer Center. The authors concluded “Only 5–10% of all cancer cases can be attributed to genetic defects, whereas the remaining 90–95% have their roots in the environment and lifestyle.” Now new research backs that up.

A few weeks ago, Dr. Sanjay Gupta, CNN chief medical correspondent, confirmed in an interview that scientific research shows that environmental factors and lifestyle play a large role in cancer, and that 90% of cancers are caused by lifestyle, not DNA. He was likely referring to a new study that had just come out in the journal Nature.

According to this study, the majority of cancers are influenced by environmental factors and are modifiable through lifestyle changes. Most cases of cancer result from avoidable factors such as exposure to toxic chemicals and radiation, contends the study published in Nature on December 16.

Earlier last year, an article in the journal Science concluded that “differences in inherent cellular processes” are the chief reason that some tissues become cancerous. The authors of that paper, Dr. Bert Vogelstein, a prominent geneticist, and biostatistician Cristian Tomasetti, published their report on how much of cancer risk is due to defects in stem-cell division versus extrinsic factors such as environmental exposure to carcinogens. The authors argued that although some cancers clearly had strong environmental links — such as liver cancers caused by hepatitis C infection or lung cancer resulting from smoking — many cancers were explainable mainly by stem-cell defects, and preventive measures would be less effective than early detection and treatment.

Yusuf Hannun, a cancer researcher at Stony Brook University in New York, was startled by that conclusion. The Tomasetti and Vogelstien research, he argued, assumed that the two variables — intrinsic stem-cell division rates and extrinsic factors — were entirely independent. But what if environmental exposures affect stem-cell division rates, as radiation is known to do? Ultraviolet light, for example, tends to create a tell-tale signature of mutations in DNA.  Dietary choices have been demonstrated to actually slow down or reverse cancer cell growth.

In trying to pinpoint the contribution of environmental factors to cancer risk, Hannun and his colleagues looked at epidemiological data showing that, for example, people who migrate from regions of lower cancer risk to those with higher risk soon develop disease at rates consistent with those of their new homes. Dr. T. Colin Campbell (The China Study) reached the same conclusion.

Hannum noted that mutations during cell division rarely build up to the point of producing cancer, and in almost all cases, some exposure to carcinogens or other environmental factors would be needed to trigger disease. Looking at the increasing incidences of various types of cancers, including lung cancer, the authors concluded that “large risk proportions for cancer are attributable to changing environments” such as smoking and air pollutants. Exposure to the sun and poor diet also play a role.

So while most doctors tell newly diagnosed cancer patients (other than smokers) they don’t know why they got cancer – bad genes or bad luck or some unknown factor – we are much less dismissive. We think that learning why cancer patients get sick is the most important factor for getting them well. And when we press patients to explore those environmental and lifestyle factors that surely helped get them into trouble, they realize that they may have tremendous power for getting well and staying well.