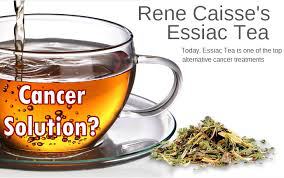 While cancer patients in the Western world spend millions of dollars each year on traditional “slash, burn and poison” treatments, there have been powerful natural protocols (and natural medicine practitioners) that have been helping the body heal itself through the use of herbs and other modalities for thousands of years. One formula that Native American healers have used for centuries goes by the modern name Essiac, and it has potent anti-cancer properties.

The History of Essiac Tea

Essiac tea can originally be linked to the Ojibwa Indians’ “Tea of Life,” an herbal remedy of the native tribes of Canada and the northern United States. As the story goes, Rene Caisse was a Canadian nurse in the 1920’s when she obtained the information from an English woman who was cured of breast cancer by an herbal formula that an Ojibwa Indian had given her. That formula would eventually become Essiac (Essiac is Caisse spelled backwards).

Between 1922 and 1978, Rene worked tirelessly — in spite of constant persecution from the Canadian medical establishment — and helped thousands of individuals through her clinic in Ontario. According to the official Essiac website, she refused payments for her services, although she did accept donations to support her clinic. While she developed and perfected the Essiac formula, she also worked in partnership with some heavy-weights in the field of medical research in Canada. Among these individuals was Dr. Frederick Banting of the Banting Institute, Department of Medical Research, at the University of Toronto. Banting was famous for his discovery of insulin and is quoted as saying to Caisse at one point:

“I will not say you have a cure for cancer. But you have more evidence of a beneficial treatment for cancer than anyone in the world.”

What is in Essiac Tea?

These days, the Essiac formula has been further developed by various natural health companies to include added ingredients which work with the original formula. There are four basic ingredients that are present in all Essiac formulas, however. They are:

Burdock Root:  Burdock is known as a blood purifier which helps to remove toxins through the urinary, lymphatic and respiratory system;

Sheep Sorrel:  Sheep Sorrel is also known as sorrel or “dock” and is a powerful herbal agent against cancer. It is also an anti-inflammatory, antibacterial and an immune system booster;

Indian Rhubarb Root:  Sometimes Essiac providers will use the term “Turkish Rhubarb” or “Chinese Rhubarb.” Of course, since the original formula was obtained by the Ojibwa, this can be slightly misleading since whatever type of Rhubarb they used in the past had to have been found in the local area. Because of this, some speculate that the name “Indian Rhubarb” does not indicate the country of India, but is instead a nickname for the type of plant that grew in the wilds of North America and was part of the Native diet (part of the Polygonum viviparum genus and species).

However rhubarb wound up in the Essiac formula (whether through the English gardens of the late 1800’s and early 1900’s or through the native variety), Rhubarb Root is a vital component of Essiac since, in addition to its other curative features, it contains a known anti-tumor agent called emodin.

Together, these four herbs create a powerful immune-boosting and anti-cancer elixir that can destroy the overgrowth of bad bacteria, viruses and parasites, detoxify the liver and kidneys, enhance the immune system, provide the body with a powerful dose of antioxidants, and reduce tumors.

Some Cautions about Essiac Tea

It’s obvious from the above list of effects that these four ingredients are powerhouses for healing. As such, they must be taken seriously when considering a cancer protocol that uses them. Several experts have produced warnings about dried and prepared herbal Essiac formulas, since these may sit on the shelf for months and lose their potency. In addition, according to CancerTutor.com and other sources, caution must be taken when using Essiac if you have any of the following conditions:

During the over fifty years that Ms. Caisse worked to heal people and spread the word about the formula, she encountered obstacle after obstacle from the medical establishment, both in the United States and Canada. To this day, the U.S. Federal Drug Administration (FDA) still has not approved Essiac as a cancer treatment and it is still on its list of “new drugs not generally recognized as safe.”

My advice, if you can’t obtain fresh herbs to make the tea yourself, is to obtain them from a truly reliable source. The best source in terms of credibility is the original Essiac formula website that is directly connected to Rene Caisse herself. Do your own research and talk to a qualified naturopathic health care provider before you start on an Essiac protocol for cancer. Then consider it as a major component of your overall cancer-fighting regime.