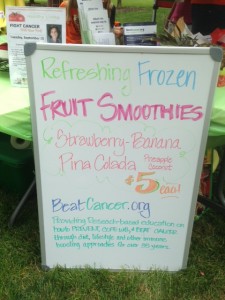 In the past three weeks, my Juice Plus+ team and I have sponsored Juice Plus+ booths at two county fairs and a local town celebration. We thought it was an excellent opportunity to help raise money for BeatCancer.org by selling health promoting smoothies at one event, and to raise awareness for the educational events Dr. Susan Silbersteinwill be speaking at in September in central Nebraska.

As I was planning our smoothie sales, I knew I didn’t want to simply raise money. I wanted to pass on the gift of the “light bulb” that Dr. Susan turned on in me several years ago. I wanted to help folks to really begin thinking about how THEY THEMSELVES have more CONTROL over their own health than they ever imagined (or were ever helped to understand), and that PREVENTION is so much more powerful than so-called “early detection”. I wanted to begin to help open their eyes to the truth about cancer.

I also wanted to help them to begin realizing on their own how the fundraisers held for cancer organizations are often times selling the very foods that contribute to the disease they are all so passionately raising money to fight! I wanted to help them to realize on their own that we have been led to believe that we need to continue to look for and invest in a “cure”, detect cancer “early” and poison, cut and burn it out, and to spread “awareness” about cancer, even though all of these are folly!

So, with the help of Dr. Susan, I designed a four part BeatCancer Quiz, displayed each question on a free-standing foamboard and asked attendees if they’d like to take our quiz by answering the questions. At the end, their name would go into a drawing for our BeatCancer gift basket, which was loaded with BeatCancer.org literature, JP Complete shake mix, a shaker bottle, and a fresh pineapple. 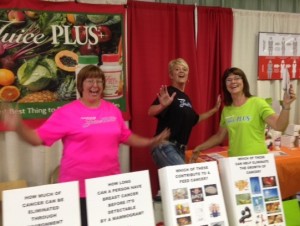 I knew we would turn on some light bulbs with our BeatCancer Quiz, which we did. What I didn’t anticipate was how much it would impact me and my team as
we asked these questions over and over again, listened to the responses, and watched the expressions on the faces of people who, before that quiz,
had absolutely NO IDEA how little they REALLY knew about cancer – even those who believed we couldn’t teach them anything, because they were survivors.
They had no idea that THEY could have power over cancer! This was a completely foreign concept to them, including the cancer survivors!

Nearly everyone was shocked that it would take a tumor EIGHT YEARS and over FOUR BILLION CANCER CELLS to grow to the size of a dime to FINALLY be generally detected by a mammogram. Most women learned for the first time that even though they had been getting mammograms for YEARS at the recommendation of their medical doctors, they could have been getting a safer, less painful and MUCH EARLIER test, a thermogram. Personally, I was incensed at this knowledge after suffering excruciatingly painful mammograms and finally giving up because it made no sense that something that squished and caused that much unnatural pain could be beneficial!

After the quiz, most people grabbed up BeatCancer.org literature, listened further to ways they could give their bodies a nutritional boost, and gladly shared their contact information, because they wanted to be personally invited to Dr. Susan’s talk. They don’t want to accidentally miss it!

I have no doubt that our BeatCancer quiz made more of a difference in the lives of some of those people than has ever been made in regards to all the cancer education and awareness they’ve ever been exposed to. Of course, what they do with this new found information is their choice. We hope to continue to educate, encourage and impact them, and help them to make the right choices.

We also hope that light bulbs will become so numerous and that they will illuminate so brightly, that it will be clear which cancer organization is making a REAL difference in the lives of people.

BeatCancer.org is REAL hope for everyone who doesn’t want to know what it’s like to watch a loved one suffer or suffer cancer themselves.  Thank you for making such an incredible difference! With much gratitude!

Jake Derr is a passionate Juice Plus+ Wellness Educator from Cozad, Nebraska