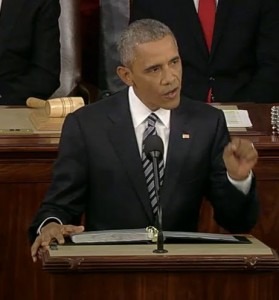 In his final State of the Union address, President Obama announced a national effort to end cancer in a new initiative led by Vice President Joe Biden. “For the loved ones we’ve all lost, for the family we can still save, let’s make America the country that cures cancer once and for all,” Obama said. This national commitment is wonderful, but it may be seriously misguided.

Following the address, the Vice President announced that the effort will focus on two priorities: increasing resources (both public and private) to fight cancer, and sharing and coordinating information among “cancer fighters.” Biden stated, “Fifty-five years ago, President John F. Kennedy stood before a joint session of Congress and said, ‘I believe we should go to the moon.’ Biden said. “This is our moonshot.”

We agree with The Prevent Cancer Foundation, which stated in a January 13 press release, “We are encouraged by the Administration’s dedication to joining us in the fight to end cancer, and are confident that they recognize the pivotal role of prevention and early detection in saving lives.” I personally am hopeful but not so confident.

Therefore, besides more resources and more information, I would propose two additional priorities: We need to change our approach to focus more on prevention through diet and lifestyle and, for diagnosed patients, to focus more on repairing the body than on destroying the symptom!

Over 40 years ago, another presidential State of the Union address expressed a similar goal. President Nixon, during his January 1971 State of the Union address, announced he would “ask for an appropriation of an extra $100 million to launch an intensive campaign to find a cure for cancer.” Later that year he signed into law the National Cancer Act: “The War on Cancer.”

Unfortunately, over four decades later, the “war on cancer” is still going on. The cancer rates in this country are higher than ever and we are not any closer to a cure.  As Dr. Devra Davis (The Secret History of the War on Cancer) stated, we are fighting the wrong war with the wrong weapons. And as Albert Einstein stated, “insanity is doing the same thing over and over and expecting a different result.”  So the commitment to “find the cure” must use different tools.  Profit-driven pharmaceutical companies must not be the leaders.  Temporarily reducing symptoms is not the same as producing full and permanent recovery. Addressing the causes of cancer rather than its symptoms is where we will see true results.