In 2006 I found a lump in my leg, about the size of a dime in my upper thigh. I thought nothing of it but after 3 months it didn't go away. The fact it hadn't gone away began to alarm me. I decided I wanted to see my dermatologist for a biopsy. They gave me a biopsy and it came back negative so they told me to go home and not to worry about it. However, I knew something wasn't right and that it shouldn't be there. So, I called them and told them I wanted to schedule surgery and wanted it cut out. They laughed at me and said it wasn't necessary. I told them I didn't care what they thought, I wanted an appointment for surgery. They finally agreed." 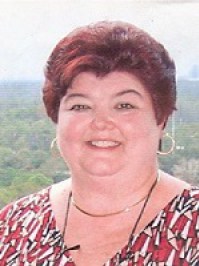 About a week later I went into the office and of course they examined me again, still to find the lump. They gave me a local anesthesia around the area and began making an incision. They began cutting. And cutting, and cutting, and cutting until this had gone on for well over an hour. I began complaining that it was hurting a little bit, and they were pulling on the nerve. I didn't actually feel it, it was more of a very taunt tug. They told me to take a deep breath and hold it and they would then pull it out. They pulled it out alright. It was not just a lump the size of a dime – no, it was a tumor the size of a grown man's fist. At that point, they put it in a jar and sent it to the pathology lab. It came back malignant. They also told me that if I had decided not to have the surgery when I did, and the lump had grown down into the muscle of my leg, they would have had to amputate my leg. Shortly after that visit, they wanted me to go to Moffitt Cancer Center in Florida and have radiation treatmentsin case there were any remnants they might have missed. I declined and went to a natural homeopathic doctor. He had a very interesting view on my tumor. He had a patient who had the same type of problem a few years prior to meeting me. And it was all related to her teeth. So he asked me for an x-ray of my teeth and sent it off to his dentist friend in Texas. The results came back. I had mercury poisoning. My fillings had all leaked into my system and my body had no idea how to get rid of this toxic compound, so it dumped it all in my leg. I had several teeth that were filled with quicksilver, a pretty standard material used back in the 60's and 70's. Later, upon receiving this news, I had all of my fillings removed and replaced with porcelain. I have never had another problem. I have been 9 years cancer free….

Your organization is incredible and I have my greatly improved health to offer as evidence. Dr. Shayne is such an amazing person and has enlightened me about every aspect of health and well-being. I have subscribed to each recommendation she has made and already see the benefits of her great advice. I am certain for the first time in 6 years that recovery is within my reach. Thank you, thank you, thank you Dr. Shayne and BeatCancer.org!!! Keep up the great work!

Thank you especially to Dr. Shayne, who spent hours with me on the phone to make me feel better during my ordeal. It is much appreciated and will never be forgotten. 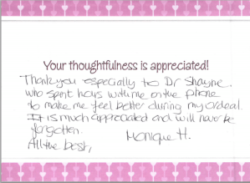 Dear Susan, I am so impressed with your knowledge and expertise, plus the generosity of your time. Your counseling and education has been astounding. You and your organization provide an invaluable service. Les too is so happy to have met you and will be compliant with perhaps all or most of your suggestions. Thanks so much for all you have done and all that you will continue to do. Warmly, Rodney Schlaffman, P.A. Elkins Park, Pennsylvania

Dear Dr. Silberstein, I wanted to take this opportunity to thank you for offering this course. My husband and I visited your office over 12 years ago when my husband was already in the final throes of a two-months-to-live prognosis. He passed away maybe nine months later (shortly after our daughter’s first birthday) after trying just about everything, but the experience we shared and the information gleaned from your office ended up completely changing the course of my life in very positive ways. You probably don’t hear much from the families of those who have passed on or how your help continues to help those families for the long term and in wide-webbed ways, so I wanted to share my story with you. I have been a professional wheatgrass grower now for the past 10 years (couldn’t have paid a fortune teller a million dollars to see that one coming). Even though I have moved to another part of the state, I continue to have a friendly professional relationship with the wheatgrass grower you once referred to us. I ended up developing professional relationships with integrative medical offices both in Philadelphia and locally, and I direct-ship weekly to clients in the mid-Atlantic states. I’ve contributed to books/articles, taught others how to grow, and even inspired some to start their own business. People often call me with more on their mind than just wheatgrass, and when that happens, I often recommend them to your organization, so this course is a real godsend. It exercises my undergrad education in psychology that never had a chance to blossom and puts me back in touch with why I had become a wheatgrass grower to begin with. Had I known about this course sooner, I would have signed up sooner. Dr. Silberstein truly understands the needs of cancer patients and delivers a high standard for health professionals. The videos, downloadable materials, and intellectual information in this course are invaluable to anyone who would like to communicate more effectively with cancer patients. Thank you. Sincerely, Ellen McGlynn