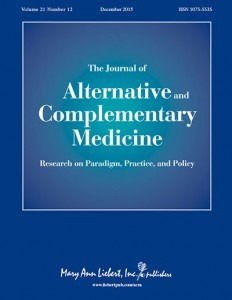 A new study published this month in The Journal of Alternative and Complementary Medicine showed that cancer patients commonly use complementary and integrative approaches, and that over 95% of patients would be interested in one or more of these therapies if offered during their hospital stay. We knew that 38 years ago, when patients looking for complementary and alternative therapies began contacting our Center. The advent of the internet has only increased awareness and interest.

According to the 2007 National Health Interview Survey published by the National Center for Health Statistics (Centers for Disease Control and Prevention), complementary and alternative medicine (CAM) use in the United States was widespread and estimated to be as high as 64% within the cancer patient population. The US survey, which included responses from 1785 persons who reported a previous cancer diagnosis, was evaluated in an article published in The Journal of Alternative and Complementary Medicine in 2012.

That same year, a comprehensive international review discussing the frequency with which cancer patients use CAM was also published. The research led by Markus Horneber, Division of Oncology/Hematology, Klinikum Nuernberg, Germany, resulted in a meta-analysis (a research study of the research studies) of CAM use among cancer patients.  The study reviewed surveys of more than 65,000 cancer patients in 18 countries, including Australia, Canada, Europe, New Zealand, and the United States. The combined prevalence for current use of CAM across all studies was 40%. (The highest was in the United States). The meta-analysis suggested a steady increase in CAM use from an estimated 25% in the 1970s and 1980s, to more than 32% in the 1990s, to 49% after 2000, with some evidence that the use has increased considerably in recent years.

In the latest study, as part of a broad initiative to improve patient-centered care with integrative medicine, oncology inpatients at an academic medical center were surveyed. Researchers at the University of California, San Francisco, Osher Center for Integrative Medicine evaluated the prior-year use of 12 different complementary and integrative health (CIH) approaches by 166 hospitalized oncology patients (average age 54 years) and assessed their interest in receiving seven such services while in the hospital.

As reported in this study, the most commonly used CAM approaches were vitamins and nutritional supplements (67%), special diets (42%) and manual therapies such as massage and acupressure (39%). In terms of interest in CIH approaches if they were offered, more than 40% of patients expressed interest in each treatment, including nutritional counseling (77%) and massage (76%).  About 50% of participants were interested in acupuncture, biofeedback and meditation.

The researchers concluded that rates of CIH use among patients with cancer were high, as were their preferences to have these services available in the inpatient setting. The authors also noted that hospitals have the opportunity to provide patient-centered care by offering inpatient CIH services.

Complementary (often misspelled with an “i” — but that means free!) therapy refers to any treatment that is used by patients alongside conventional therapy. It is not meant to replace conventional cancer treatment but to help manage symptoms, alleviate treatment side effects, enhance a patient’s sense of well-being, and improve overall treatment efficacy.

Integrative oncology is an approach to cancer care that incorporates promising complementary therapies in collaboration with conventional oncologic treatment. Some oncologists like Dr. Charles Simone and Dr. Mitchell Gaynor provide integrative treatments along with conventional therapy. Many cancer centers offer integrative programs on-site, but frequently, those with cancer need to access those therapies on their own as outpatients.

The term  alternative cancer therapies technically refers to healing techniques that are used in place of conventional cancer treatments, or at least instead of chemotherapy, radiation and hormone therapy once surgery has been performed.

As defined by the National Center for Complementary and Alternative Medicine, complementary and alternative medicine (CAM) is “a group of diverse medical and healthcare systems, practices, and products that are not presently considered to be part of conventional medicine.” For some CAM practices, there is scientific evidence that a treatment is both beneficial and safe. For many other practices, evidence is negative, lacking, or inconclusive. Just because a therapy is labeled “CAM” or “integrative” does not necessarily mean that it is safe or efficacious; nor does it necessarily mean that it is toxic or inefficacious. In general, research on CAM therapies is sparse as compared with conventional oncologic treatments, but evidence-based and outcomes-based research is promising.

A large percentage of people with cancer use some form of CAM. Being diagnosed with cancer and undergoing treatment is a frightening, exhausting, and demanding experience. CAM appeals to many patients with cancer because these treatments often offer a chance to take control and decrease uncomfortable symptoms such as pain, fatigue, and nausea; improve nutritional, immunological and psychological status; and help prevent recurrence.

There are hundreds of CAM approaches, including homeopathy, naturopathy, nutritional programs (like special diets, nutritional supplements, and vitamin C infusions), Eastern medicine (Traditional Chinese Medicine, acupuncture, and Ayurvedic medicine), energy healing, detoxification regimens, botanicals, mind-body techniques (like mindfulness, meditation, biofeedback, cognitive-behavioral therapy, relaxation, guided imagery, hypnosis, yoga, music therapy, creative/expressive therapies, and spirituality), and body-based therapies (like massage, chiropractic, and reflexology). To learn how some of these could help in your particular case, set up a consultation with one of our counselors.

Acupuncture — Acupuncture involves inserting thin metal needles into the skin at specific points on the body, sometimes with electrical stimulation. There have been numerous studies of acupuncture’s efficacy for patients undergoing cancer treatment. Acupuncture with electrical stimulation has been found to be useful in treating nausea and vomiting from chemotherapy, and some trials suggest that acupuncture can reduce cancer pain.  In one trial, the use of acupuncture significantly reduced mouth pain and the sensation of dry mouth in a group of patients undergoing radiation therapy for head and neck cancer.

Botanicals or Herbal Medicine — Chinese and Ayurvedic herbal medicines are widely used in many areas of Asia to reduce the toxicity associated with conventional anticancer therapy; however, little information is available from controlled studies regarding safety and efficacy. Combinations of western herbs in tincture (liquid), capsule, or tea form may also be helpful. Examples of herbal treatments include Essiac (Flor Essence tea), ginseng, green tea, and mistletoe therapy.

Mind-Body Techniques — Mind-body techniques like hypnosis, guided imagery, meditation, yoga, biofeedback, and prayer, may be useful before and during painful or stress-inducing medical procedures, chemotherapy, or radiation treatment to control anxiety, pain, nausea and vomiting.

Hypnotherapy — Hypnosis is a state of altered consciousness that allows patients to focus away from pain, anxiety, or nausea. One study examined the benefit of hypnosis before surgery for breast cancer. Researchers found that women who had a 15-minute hypnosis session before surgery experienced less pain, nausea, and fatigue after surgery, and they required significantly less time in the operating room compared with women who were not hypnotized.

Guided Imagery — Visual or guided imagery is a technique that encourages the patient to relax by focusing on calming thoughts or experiences. In one study, women receiving chemotherapy for newly diagnosed breast cancer had a better quality of life if they used relaxation training and guided imagery, as compared with a group that had chemotherapy alone.

Massage Therapy — Massage involves stroking and kneading the skin, muscles, and tissues in any of several ways. One study was done with 1290 cancer patients who received massage therapy at Memorial Sloan-Kettering Cancer Center. Researchers found that pain, anxiety, fatigue, and nausea decreased by 50 percent in patients who received massage. Some patients reported benefits lasting up to 48 hours.

Dietary Programs – There are many dietary regimens that have been effective against cancer, including the macrobiotic diet (all cooked), the Hippocrates diet (all raw), and the Gerson diet (heavy on juicing). The above diets are difficult and not feasible for many patients, but a heavily plant –based diet should be quite attainable and has been demonstrated in numerous studies to affect not only quality of life but also survival in cancer patients.  For more on that research, see Kitchen Chemotherapy and Alphabetical Beat Cancer Diet.

Whole Food-Based Supplements – In general, whole food-based supplements can achieve much the same results as diets rich in plants.  One such example is Sun Soup, a blended green concentrate of selected plants, which appears to have immune-stimulatory and anticancer properties.  Two small studies have been conducted in patients with late-stage non-small-cell lung cancer, both of which found that patients who received the supplement had improved survival. Patients in both studies received conventional medical treatments, as well as the Sun Soup mix. However, further studies are needed before the treatment can be considered safe and effective.

An increasingly large percentage of patients with cancer use complementary and integrative approaches to manage symptoms of their disease and potentially debilitating effects of conventional treatment. Although most CAM and CIH approaches remain available only in the outpatient setting, several recent studies have demonstrated the feasibility and efficacy of such therapies for treating symptoms such as pain or anxiety in the inpatient context. I truly hope that integrative therapies will become routine services offered by hospital oncology departments; that this progress will foster additional outcomes-based research; and that ultimately insurance companies will support many of these therapies both for cancer patients and for the general population. Such support can only improve everybody’s bottom line!