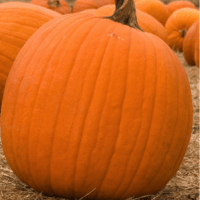 Pumpkins originated in the southern arid regions of the Americas. Records indicate they have been cultivated for roughly 9000 years, along with other winter squashes. Pumpkins are members of the genus cucurbita. Pumpkins were originally consumed primarily as a source of protein and for their seeds, which are rich in oils.

Pumpkins are classified as having cooling properties in Chinese medicine. They are both sweet and bitter. They benefit the pancreas and digestive system. Traditionally, pumpkins have been used to dry damp conditions in the body and expel mucus build-up. These conditions can manifest as symptoms such as eczema and asthma. Pumpkins have been used to balance blood sugar for both diabetic and hypoglycemic conditions. Pumpkins and especially pumpkin seeds are noted for their use to clear intestinal worms. In addition, the seeds have diuretic properties, and are a source for zinc and omega-3 fatty acids in the diet.

Pumpkins have been used for swelling of the prostate. They are a good addition to a cancer preventive diet because they help to protect the immune system. The plant sterols in pumpkin have been shown to help lower cholesterol levels, thereby preventing arteriosclerosis and balancing blood pressure. The carotenoids in pumpkin help to prevent cataracts.
Pumpkins are a rich source of nutrients, including magnesium, potassium, selenium, fiber, protein, and many vitamins and minerals.

When selecting a pumpkin look for a smooth, un-shiny skin. The flowers, seeds, and flesh are all edible. Refrigerating a pumpkin will step up the ripening process. They are best stored in a cool, dry place for up to one month. The seeds can be prepared as a tea or broth, or lightly roasted.
There are gorgeous pumpkins available right now at our super Santa Fe Farmer’s Market! They’re not just for dessert anymore!